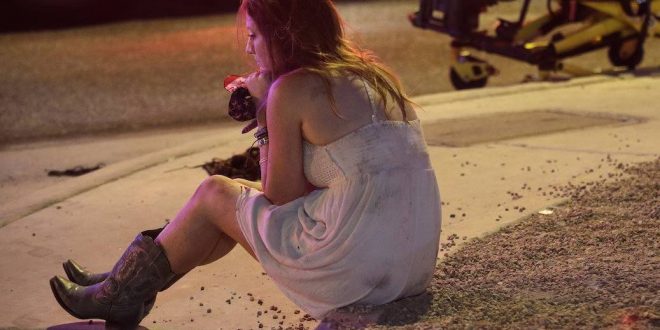 A gunman who fired upon thousands of people attending a music festival on the Las Vegas Strip has killed more than 50 people, police say. More than 400 others were wounded in the mass shooting and panic that ensued. At least one of the dead is an off-duty police officer who was attending the concert.

Thousands of panicked people fled the scene, in some cases trampling one another as law enforcement officers scrambled to locate and kill the gunman. Shocked concertgoers, some with blood on their clothes, wandered the streets after the attack.

A police spokesman confirmed that a lone gunman, named by police as Stephen Paddock (64), opened fire while country music artist Jason Aldean was playing a concert at the Route 91 Harvest Festival.

Police said they had no information about Paddock’s motive, and that he had no criminal record and was not believed to be connected to any militant group. Paddock killed himself before police entered the hotel room he was firing from, Clark County Sheriff Joseph Lombardo told reporters.

“We have no idea what his belief system was,” Lombardo said.

“We believe the individual killed himself prior to our entry,” Lombardo told a news conference.

Earlier reports indicated Paddock had been shot by police.

Lombardo said there were more than 10 rifles in the room where Paddock killed himself after checking into the hotel on Thursday. Paddock was not known to law enforcement, Lombardo said.

The dead included one off-duty police officer, Lombardo said. Two on-duty officers were injured, including one who was in stable condition after surgery and one who sustained minor injuries, Lombardo said. Police warned the death toll may rise.

Police are still finding people who had taken cover during the attack, Lombardo said.

“It’s going to take time for us to get through the evacuation phase,” Lombardo said.
Authorities believed they had located Paddock’s roommate, who they identified as Marilou Danley. He gave no details of whether she was suspected of involvement in the attack but described her as an “associate.”

Lombardo said rumours of other shootings or explosives such as car bombs in the area were false.

“It sounded like fireworks. People were just dropping to the ground. It just kept going on,” said Steve Smith, a 45-year-old visitor from Phoenix, Arizona, who had flown in for the concert. He said the gunfire went on for an extended period of time.

“Probably 100 shots at a time. It would sound like it was reloading and then it would go again,” Smith said. “People were shot and trying to get out. A lot of people were shot.”

The suspected shooter’s brother, Eric Paddock, said the family was stunned by the news.

“We have no idea. We’re horrified. We’re bewildered and our condolences go out to the victims,” Eric Paddock said in a brief telephone interview, his voice trembling. “We have no idea in the world.”

US President Donald Trump offered his condolences to the victims via a post on Twitter early Monday.

“My warmest condolences and sympathies to the victims and families of the terrible Las Vegas shooting. God bless you!” Trump said.

Las Vegas’s casinos, nightclubs and shopping draw some 3.5 million visitors from around the world each year and the area was packed with visitors when the shooting broke out shortly after 4am Irish time.

Web articles – via partners/network co-ordinators. This website and its contents are the exclusive property of ANGA Media Corporation . We appreciate your feedback and respond to every request. Please fill in the form or send us email to: [email protected]
Previous: Fifty arrests during a march of neo-nazi in Sweden
Next: Who Is Stephen Paddock: The Las Vegas Shooting Suspect?