Home » World » Juli Briskman: Cyclist who flipped off Trump claims she was fired from job 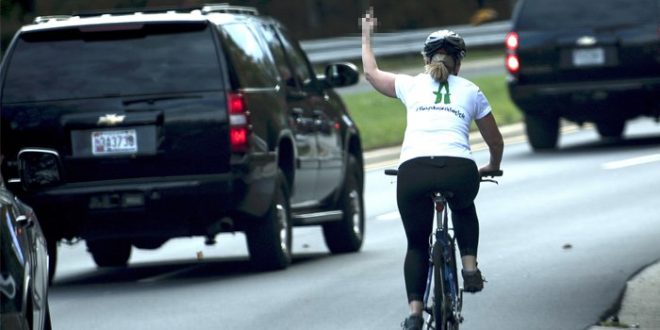 Juli Briskman: Cyclist who flipped off Trump claims she was fired from job

Juli Briskman: Cyclist who flipped off Trump claims she was fired from job

Juli Briskman, a female cyclist whose “one-fingered salute” to President Donald Trump’s motorcade went viral on social media has now lost her job over the incident.

Briskman was out for a bike ride when her less than favorite president and his staffers passed by in black SUVS.

As the cars passed, Briskman flipped the motorcade off, which was caught on camera by a staffer, according to Fortune.

The photo, which went viral, was seen by Briskman’s employer Akima LLC. after she designated it as her Facebook and Twitter profile photo.

Her employers cited “lewd” and “obscene” content on Briskman’s social media pages as the reason for firing her, Briskman told the HuffPost.

Briskman lives in Virginia where companies can let workers go for any reason.

Web articles – via partners/network co-ordinators. This website and its contents are the exclusive property of ANGA Media Corporation . We appreciate your feedback and respond to every request. Please fill in the form or send us email to: [email protected]
Previous: Quantum materials offer novel route to 3-D electronic devices, says new research
Next: Big planet spotted in ‘bulge’ at the centre of our galaxy