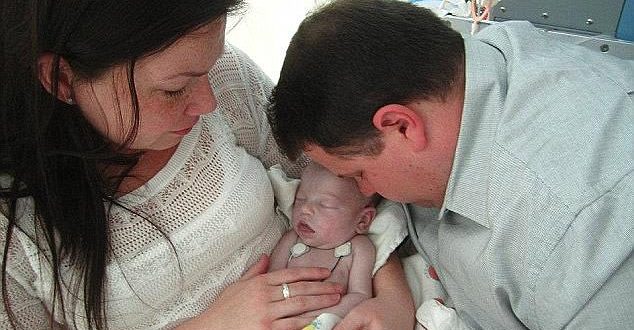 A mother has shared the heartbreaking story of how her firstborn son died, after she accidentally starved him while breastfeeding.

Jillian Johnson said believing the myth that “breast is best” killed her firstborn Landon, who died just 19 days old, after he was exclusively breastfed from birth.

“Every class and book was geared toward breastfeeding and how it’s so important if you want a healthy child,” the Southern Californian woman wrote on her website The Fed is Best Foundation.

“Landon was on my breast all of the time. The lactation consultants would come in and see that ‘he had a great latch and was doing fine’.”

Mrs Johnson said she was encouraged to exclusively breastfeed and was closely monitored by nurses, lactation consultant and doctors.

“If I had given him just one bottle, he would still be alive.

“The best advice I was given by one of his NICU doctors while he was on life support is, ‘Sure breast is best, but follow with the bottle’.”

The mother said only one lactation consultant mentioned she might have a problem producing milk because of the hormone imbalances caused by polycystic ovary syndrome, and recommended some herbs to help once discharged.

Landon was sent some at less than three days old, despite losing 9.7 per cent of his birth weight.

Just 12 hours later, he went into cardiac arrest. His parents found him unconscious, blue and without a pulse. He was rushed back to hospital where he received CPR and was put on life support.

That’s where Mrs Johnston learned her baby boy suffered a wide-spread brain injury due to severe dehydration, because she wasn’t producing milk.

The new parents made the difficult decision to switch off Landon’s life support 15 days later, on March 15, 2012.

Web articles – via partners/network co-ordinators. This website and its contents are the exclusive property of ANGA Media Corporation . We appreciate your feedback and respond to every request. Please fill in the form or send us email to: [email protected]
Previous: Scientists find Homo naledi fossils are younger than initially thought
Next: Smuggled dino eggs gave birth to ‘baby dragons’, says new research