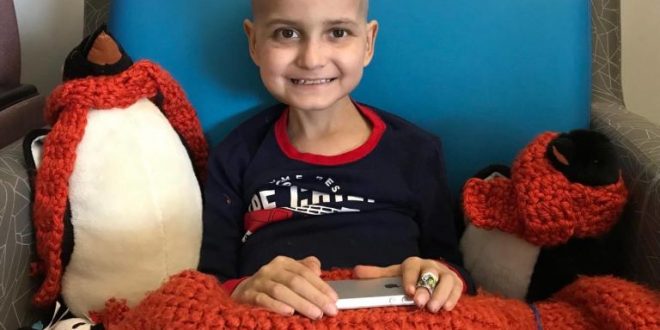 Jacob Thompson was diagnosed with Stage 4 High Risk Neuroblastoma in February of 2014 when he was just 5 years old. Amazingly, Jacob is now 9 but the family says his time is limited and he won’t be leaving the hospital.

Jacob was admitted to the Barbara Bush Children’s Hospital in Portland, Oregon, on 11 October 2017. Considering how little time he has left alive, his family plans to celebrate one last Christmas with him during the weekend.

Jacob’s hospital room will be decorated with a tree and lights and the boy will celebrate the festival with his family with some fake snow and a Santa Claus, his father said.

The family has also started a fundraising page on GoFundMe.

Jacob’s medical report states that the neuroblastoma has spread to his head — namely the sinuses, bottom of the skull, several spots in the small bones in the inner ear and several spots on the membrane between the skull and brain, says the GoFundMe page.

Neuroblastoma is a type of childhood cancer that starts in immature nerve cells in the sympathetic nervous system. These cells are called neuroblasts.

Sometimes neuroblasts change and no longer grow or behave normally. These changes may lead to non-cancerous, or benign, tumours such as ganglioneuroma.

In some cases, changes to neuroblasts can cause neuroblastoma. It can develop anywhere in the sympathetic nervous system, but it starts most often in the abdomen in the adrenal gland that lies just above the kidney. It can also start near the spinal cord in the neck, chest or pelvis. Neuroblastoma most commonly develops in babies and young children.

In rare cases, changes to neuroblasts can lead to ganglioneuroblastoma. This is a rare tumour that is somewhere between non-cancerous and cancerous.

A risk factor is something that increases the risk of developing cancer. It could be a behaviour, substance or condition. Most cancers are the result of many risk factors. But sometimes neuroblastoma develops in children who don’t have any of the risk factors described below.

Neuroblastoma is the most common solid tumour outside of the brain in children. It accounts for 8%–10% of all cancers in children.

About 80% of neuroblastomas occur before the age of 5, and the average age at diagnosis is 2.5 years. It is the most common cancer in babies under the age of 1 year. Neuroblastoma is very rare in children over 10 years of age. This cancer occurs slightly more often in boys than in girls.

The following are risk factors for neuroblastoma. All of the known risk factors are not modifiable. This means that you can’t change or avoid them. Until we learn more about these risk factors, there are no specific ways you can reduce the risk.

Risk factors are generally listed in order from most to least important. But in most cases, it is impossible to rank them with absolute certainty.

Web articles – via partners/network co-ordinators. This website and its contents are the exclusive property of ANGA Media Corporation . We appreciate your feedback and respond to every request. Please fill in the form or send us email to: [email protected]
Previous: Noticing nature can increase your happiness, says new research
Next: Cells driving gecko’s ability to re-grow its tail identified, says new research