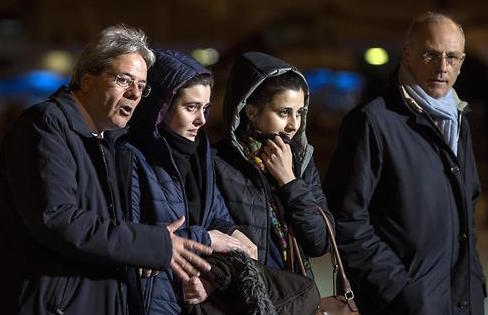 No ransom was paid to free two Italian al-Qaeda hostages in Syria, the Rome government said Friday, denying reports that a 12-million-dollar payment had secured the release of Greta Ramelli and Vanessa Marzullo.

Northern League leader Matteo Salvini said, if true, such a payment would be ‘‘grotesque.”

Hours after Ramelli and Marzullo stepped off a plane in Rome, Foreign Minister Paolo Gentiloni told the lower house of Parliament the reports of a ransom “were void of any basis in reality” and expressed surprise ‘‘that these sources were given credit without any verification.”

‘‘We are against paying ransom,” Gentiloni said, adding Italy follows ‘‘the rules and behaviours” shared by the international community.

Gentiloni’s explanation drew scepticism from opposition lawmakers, who said he did not go far enough in clarifying whether there had been any exchange of money.

‘‘Did you pay or not?” asked Maria Edera Spadoni of the 5-Star Movement.
Italian media have speculated that a brief video released on New Year’s Eve contained an encoded ransom message for the Italian government.

Dressed in black garb typical of devout Syrian women, the young aid workers asked the Italian government to help bring them home, with Ramelli saying they could be killed.

The women were kidnapped overnight July 31 on their third visit to Syria as part of a project called Horryaty, which, according to its Facebook page, was aimed at distributing aid in Syria.

It remains unclear who was responsible for their capture, although suspicion has focused on the al-Qaida-affiliated Nusra Front.

Web articles – via partners/network co-ordinators. This website and its contents are the exclusive property of ANGA Media Corporation . We appreciate your feedback and respond to every request. Please fill in the form or send us email to: [email protected]
Previous: LONDON Hacking : Police Arrest UK Man In Connection With PSN and Xbox Live Hacks
Next: 2014 Was The Hottest Year On Record, say US researchers