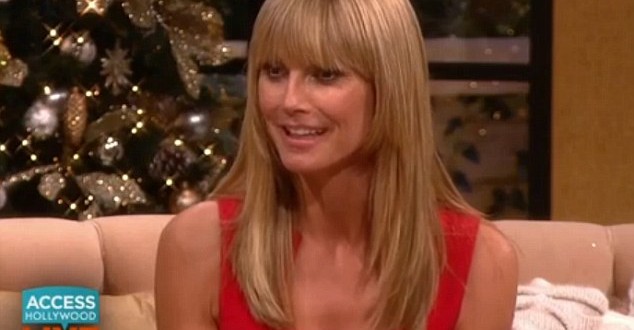 Supermodel Heidi Klum has revealed that she will no longer be modelling lingerie after turning 40 in June.

The former Victoria’s Secret Angel and mother-of-four told Access Hollywood Live that the thought of walking the catwalk in her underwear makes her feel “uncomfortable”.

Meanwhile, Klum also talks about her body and her fear of undergoing any surgical procedure to improve it, citing Botox in particular.

‘I wouldn’t say that I love [my crow’s feet], but that’s just the way it happens, right? We get wrinkles from smiling,’ explained the former VSFS model.

‘I’ve never had any [cosmetic procedures]. I’ve been too scared, to be honest with you. I’m scared that all of a sudden you’re changing too much, your face starts changing, I don’t know. I would have a hard time looking in the mirror and seeing something that I’m not used to seeing. I’d be afraid.’

Klum is currently busy with her hosting stints in “Project Runway” and “Germany’s Next Top Model.” She also dabbles into designing kids’ clothing through her line Babies R Us. On top of that, she is also a mother to four children with Seal, whom she divorced last year.

Heidi Klum started out with her career after winning a modeling contest back in Germany, after which she was offered a contract by Metropolitan Models. She had a breakthrough in her career after appearing on the cover of the Sports Illustrated Swimsuit Issue and for her appearances for Victoria’s Secret. Since then she has done numerous stints in modeling, acting and hosting.

Web articles – via partners/network co-ordinators. This website and its contents are the exclusive property of ANGA Media Corporation . We appreciate your feedback and respond to every request. Please fill in the form or send us email to: [email protected]
Previous: Gisele Bundchen’s and husband tom brady building own mansion
Next: Miranda Kerr from Australia : Star goes topless as she talks about Orlando split