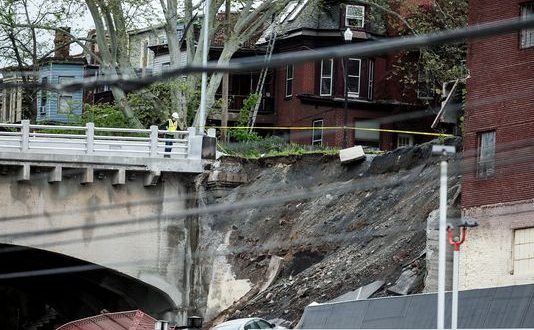 The mayor of Harrisburg says nobody was hurt after a landslide type collapse of an apartment building parking lot.

A bridge in Harrisburg remained closed Friday after a retaining wall and parking lot collapsed the day before, Pennlive.com reported.

PennDOT kept the Mulberry Street Bridge closed because of concerns about the stability of the ground near the bridge, according to the Pennlive report. The portion of Cameron Street that runs under the bridge was open Friday.

Special rescue teams in southcentral Pennsylvania, including one from York County, spent time searching through rubble and debris after a structure collapse in Harrisburg, officials said.

A cantilevered parking area collapsed onto a structure below, Sanford said. There was a car parked in the lot that fell onto a two-story business, going through its flat roof into the second floor.

Web articles – via partners/network co-ordinators. This website and its contents are the exclusive property of ANGA Media Corporation . We appreciate your feedback and respond to every request. Please fill in the form or send us email to: [email protected]
Previous: Huma Abedin interviewed in Clinton email case “Report”
Next: Captain America Civil War 2016: Super-Bro Against Super-Bro “Trailer”