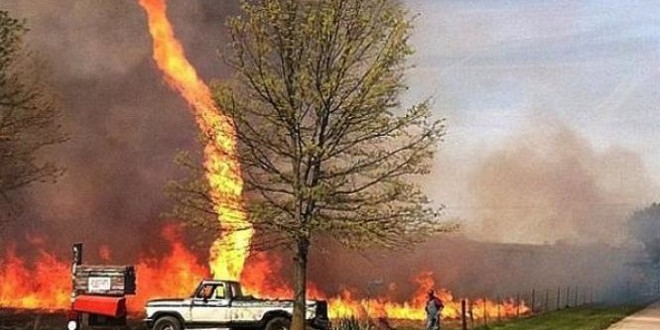 Firenado caught on camera in Missouri

Stunned by the “coolest, scariest thing” she had ever seen, Photographer Janae Copelin caught a snapshot early this week of a rare weather marvel known as a firenado.

The whirling “fire-devil” was spawned as a farmer burned off his field in Chillicothe, Missouri.

A swirling rotation of smoke, gas and debris, a firenado is generated when an active fire is swept upwards by strong winds, creating a vortex.

Ms Copelin was so amazed by what she saw that she posted the image on Instagram so she could share it with followers.

She used the hashtag #nofilter – which users sometimes employ to show they have not used any effects to create the image – to emphasise how shocked she was by what she had seen.

She wrote: ‘Had such a wonderful weekend, but this had to be the coolest/scariest thing I’ve ever seen.

‘A farmer burning off his field and as we stopped so I could take a picture the wind whipped up this fire twister. #nofilter #firestorm #firetwister’.

Fire whirls are formed when intense heat and strong winds combine. The dangerous-looking mixture then creates a tornado-like column which whips up debris and other gases.

Ms Copelin later told KMBC news: ‘Thanks to my love of Instagram I chose to drive by and as I stopped to take a picture the wind whipped up the fire into this funnel.

‘The sound and heat were intense and a bit scary not knowing if it would stay put, but it only lasted a couple minutes.’

Fire whirls are described by meteorologsists as ‘rapidly spinning vortices that form when air superheated by an intense wildfire rises rapidly, consolidating low-level spin from winds converging into the fire like a spinning ice skater, pulling its arms inward’.

Web articles – via partners/network co-ordinators. This website and its contents are the exclusive property of ANGA Media Corporation . We appreciate your feedback and respond to every request. Please fill in the form or send us email to: [email protected]
Previous: Yawning May Cool Your Brain, new study says
Next: Wyoming to reject US science standards over global warming