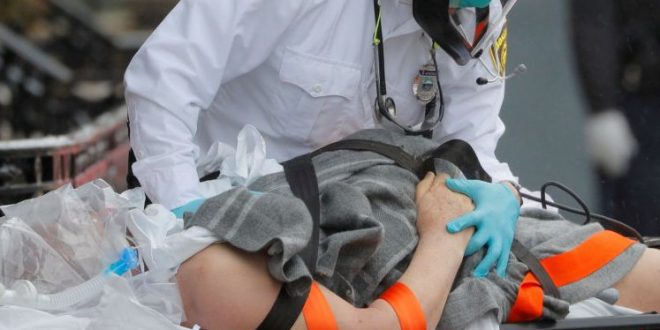 Federal Inmate Who Gave Birth While On Ventilator Dies from COVID-19.

A 30-year-old federal inmate who gave birth while on a ventilator four weeks ago died from the coronavirus Tuesday, the Bureau of Prisons said.

Andrea Circle Bear was serving a 26-month sentence for maintaining a drug-involved premises, the agency said in a news release.

Circle Bear, of Eagle Butte, South Dakota, appears to be the first female inmate to have died in custody, according to a review of reported coronavirus-related deaths within the federal prison system.

She was first taken to FMC Carswell, a federal prison medical facility in Fort Worth, on March 20 from a local jail in South Dakota. As a new inmate in the federal prison system, she was quarantined as part of the Bureau of Prisons’ plan to slow the spread of the coronavirus.

She was evaluated eight days later for her pregnancy. On March 31, she was seen for a fever, a dry cough and other COVID-19 symptoms, according to officials.

Circle Bear, who the agency said had a preexisting medical condition that put her at high risk for the disease, was taken to a local hospital, where she was placed on a ventilator. Her baby was delivered via cesarean section April 1, the agency said. Three days later, Circle Bear tested positive for the virus.

She was pronounced dead Tuesday, the agency said. The condition of her baby wasn’t immediately clear, and the bureau didn’t respond to a request for comment.

Twenty-nine other inmates have died in the federal prison system since March 19, when the agency reported the death of Patrick Jones, an inmate at Oakdale prison in Louisiana.

Six other inmates have died from the disease at Oakdale, the last reported on April 15, according to the bureau. Other prisons hit hard by the virus include Butner, in North Carolina, and Elkton, in Ohio.

The agency has said it is expanding COVID-19 testing within its prisons. To stem the spread of the disease, it is limiting inmate movement and suspending training and travel for officials, as well as nonessential services for contractors, among other measures.

Since the outbreak began, experts have warned that the virus could “wreak havoc” on American jails and prisons.

As of Tuesday, more than 1,700 federal inmates have tested positive for COVID-19. About 400 of them have recovered.

Web articles – via partners/network co-ordinators. This website and its contents are the exclusive property of ANGA Media Corporation . We appreciate your feedback and respond to every request. Please fill in the form or send us email to: [email protected]
Previous: Ivanka, Kushner ‘broke COVID-19 isolation rules to travel to NJ resort
Next: Facebook says its Blender chatbot ‘feels more human (Details)