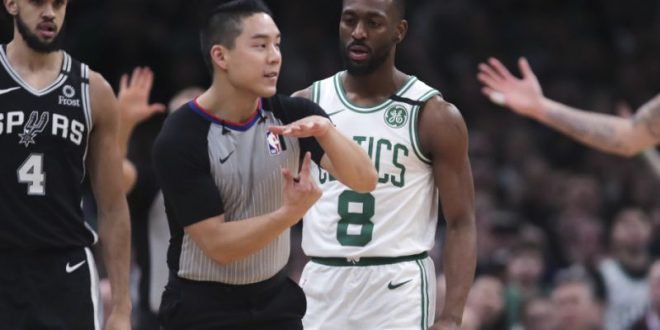 The Boston Celtics announced that the fan who threw a drink on the court during Wednesday’s loss to the San Antonio Spurs was arrested.

In the third quarter, Kemba Walker was ejected as the Celtics attempted to rally back from a 20-point deficit for arguing with an official about what he thought was a moving screen on LaMarcus Aldridge. The official tossed Walker, and what appeared to be a can of beer came flying from the stands over the Spurs bench. It exploded on the floor.

After the game, Brad Stevens expressed his disappointment about the incident.

“I’m sure the Celtics have already addressed this as an organization, but if not I apologize to the Spurs for what happened out of the stands,” Stevens said. “And that can being thrown. I told Pop after the game, I’m really sorry that they had to experience that. I hope that person’s not allowed in an NBA arena again.”

“We can’t have that,” Hayward said. “I’ve never had that happen, I don’t think. But certainly, no matter what happens on the court, we can’t have anybody throwing stuff from the fans. It’s not what it should be. So yeah, I definitely don’t appreciate that. I love our fans, love the passion that they bring. They certainly bring a lot of energy, but we’ve got to try to stay away from that.”

Web articles – via partners/network co-ordinators. This website and its contents are the exclusive property of ANGA Media Corporation . We appreciate your feedback and respond to every request. Please fill in the form or send us email to: [email protected]
Previous: Chinese paddlefish extinct, giant species has been declared extinct
Next: FBI Iranian terror threat, Prepare For the Worst From Iran Cyber Attacks