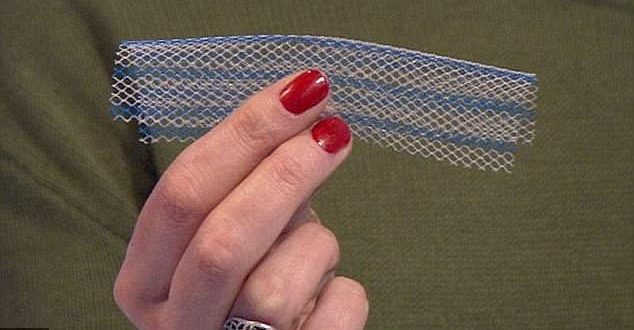 Ella Ebaugh, 51, was forced to undergo three surgeries after the mesh eroded into her urethra.

Vaginal mesh, also known as pelvic mesh, is implanted into women who suffer with pelvic organ prolapse or urinary problems by surgeons.

Ms Ebaugh was awarded her pay out after a jury in Philadelphia found that Johnson & Johnson had been negligent and its product – a mesh implant – was defectively designed, CBS News reports.

She was fitted with Johnson & Johnson’s Ethicon vaginal mesh to treat urinary incontinence after having five children.

Ms Ebaugh described the immense pain: ‘I’m in excruciating pain. When I’m standing it hurts, when I’m sitting it hurts. ‘I will suffer for the rest of my life. ‘My urethra is mangled. I feel like I’m on fire, you know, down there.’ Despite three surgeries to remove the implant, part of it remains.

Web articles – via partners/network co-ordinators. This website and its contents are the exclusive property of ANGA Media Corporation . We appreciate your feedback and respond to every request. Please fill in the form or send us email to: [email protected]
Previous: Catt Gallinger: Model’s eye tattoo could now leave her blind (Video)
Next: Researchers Underestimated How Bad Cow Farts Are