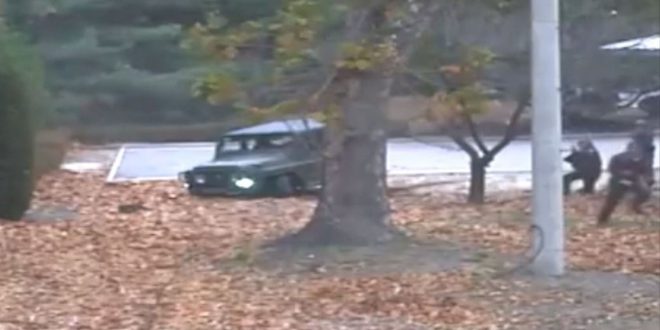 Dramatic footage has been released of the moment a North Korean soldier flees over the tense dividing line into South Korea, as his former colleagues give chase and fire their weapons.

North Korean border guards were few steps behind the Korean People’s Army (KPA) defector who was critically injured when he was hit five or six times before limping into South Korea on November 13, CCTV today released by the UN Command (UNC) shows.

The defecting soldier, who was critically injured in the escape, has since regained consciousness after being flown by a US military helicopter on Monday to a hospital in Suwon, south of Seoul.

In the video, the soldier can be seen speeding down a tree-lined road leading to the truce village of Panmunjon in a jeep, passing fields and shocked North Korean soldiers, who begin to run after him.

He then crashes the jeep into a ditch near the Joint Security Area (JSA) of the Korean Demilitarised Zone (DMA) that divides North and South Korea.

Soldiers from the North sprint to the area, firing handguns and AK rifles at the defector.

One soldier hurries across the dividing line before running back to the northern side.

South Korean soldiers then crawl to the defector, who has fallen injured in a mass of leaves, dragging him to safety as North Korean troops gather.

There were no tour groups at the time of the defection, Chad Carroll, Director of Public Affairs for the UNC said.

A UNC Special Investigation Team investigation revealed North Korea’s actions during the escape twice violated the UN Armistice Agreement that ended the Korean War by “firing weapons across the Military Demarcation Line (MDL) and when the defecting soldier actually temporarily crossed the MDL”.

A UN Command statement said officials notified the North’s military of these violations and requested a meeting to discuss the investigation results and measures to prevent future such violations.

About 30,000 North Koreans have fled to South Korea, mostly via China, since the end of the Korean War.

After undergoing two surgeries last week to repair internal organ damage and other injuries, the soldier is now conscious and no longer relies on a breathing machine, according to hospital official Shin Mi-jeong.

Web articles – via partners/network co-ordinators. This website and its contents are the exclusive property of ANGA Media Corporation . We appreciate your feedback and respond to every request. Please fill in the form or send us email to: [email protected]
Previous: Are aliens real? USA sees spate of crazy UFO sightings over two days
Next: Scientists discover first asteroid from outside our solar system