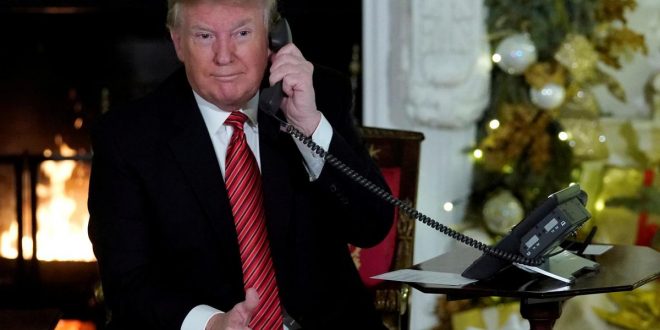 Despite a grumpy old man inviting her to question the existence of Santa Claus, it can now be revealed that seven-year-old Collman Lloyd still believes, even though the grumpy old man in question was the president of the US.

Collman’s views on Santa Claus became subject of global concern on Christmas Eve when the girl from Lexington, South Carolina, spoke to Donald Trump after being patched through to him having called the North American Defence Command’s annual NORAD Tracks Santa programme.

Mr Trump had a rare chance to show the world his charming child-friendly side. And, in the eyes of nearly everyone, he chose not to take it, instead asking the excited seven-year-old girl: “Are you still a believer in Santa? Because at seven, that’s marginal, right?”

Since only Mr Trump’s side of the phone call was filmed, it was erroneously thought that the president was talking to a boy. More importantly, the world was left wondering whether arguably the most powerful man on Earth had shattered a child’s belief in Santa Claus on Christmas Eve.

Now, however, the world can breathe easy again. Collman has confirmed that she still believes in Father Christmas.

It seems she didn’t give too much thought to what the 72-year-old president was saying, because she didn’t know what “marginal” meant.In an account given to the Charleston Post and Courier Collman said the scientist who answered the NORAD phone asked her if she would like to speak to the president.

Six minutes later, Mr Trump was on the line.

“Are you still a believer in Santa?” he asked. When she responded, “Yes, sir,” the president added, “Because at seven, that’s marginal, right?”

Collman said she did not know what “marginal” meant and simply answered, “Yes, sir.”

Mr Trump closed by saying, “Well, you just enjoy yourself.”

Collman told the Post and Courier that she and her 10-year-old sister and five-year-old brother left iced sugar cookies and chocolate milk for Santa.

And she confirmed that on Christmas morning, the food was gone and the presents were under the tree. She got an American Girl doll.

This is not the first time the world has marvelled at Mr Trump’s idiosyncratic way of trying to put children at ease.

In 2017 he hosted a Halloween trick or treat gathering for children of the media.

He pointedly asked them, ‘How does the press treat you’? and handed out chocolate to one child with the confidence-boosting aside: “Well, you have no weight problems, that’s the good thing, right?”

Footage of the event was contrasted with that of Barack Obama welcoming children to the White House by singing Purple Rain to a boy dressed as Prince, and exchanging high fives with a delighted child dressed as Superman.

Web articles – via partners/network co-ordinators. This website and its contents are the exclusive property of ANGA Media Corporation . We appreciate your feedback and respond to every request. Please fill in the form or send us email to: [email protected]
Previous: California fires utility customers May Be on Hook for Billions
Next: Child exploitation operations net 82 arrests, including 31 in Georgia