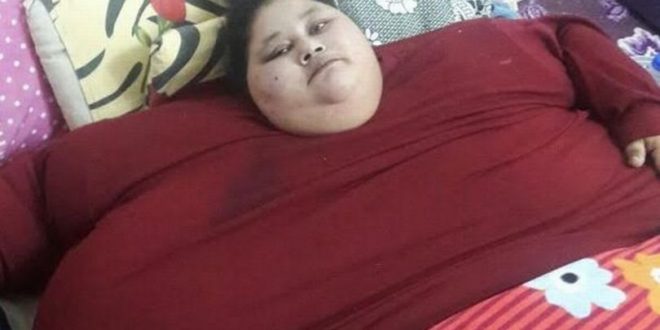 An Egyptian once known as “the world’s heaviest woman” has died aged 37 in a hospital in the United Arab Emirates.

Eman Abdul Atti died on Monday at approximately 10:36am AEST, due to complications from heart disease and kidney dysfunction, a statement from medical experts at Burjeel Hospital in Abu Dhabi said.

The hospital issued a statement six hours after her death, where the Egyptian woman was in treatment. She had celebrated her birthday on September 9.

“Our prayers and heartfealt condolences go out to her family,” said the hospital.

Ms Atti had been at the hospital since April when she arrived “bedridden” and was under the supervision of 20 medical experts. In June, Eman’s life looked like it was taking a positive turn after reports she was “able to sit independently and eat on her own”.

“[Abdul Atti] is able to sit independently for long periods on a specially tailored wheelchair. Her bedsores are almost healed, and because her voice has cleared, she is able to speak in full sentences and is communicating better with her surroundings,” Dr Yassin Al Shahat, chief medical officer at Burjeel Hospital Abu Dhabi, said at the time.

In the statement, her family “expressed their appreciation for the care and treatment provided by the hospital … and are also grateful to the rulers and the people of the UAE for their support”.

Last year, Ms Atti said she hadn’t left home for 25 years because of her size.

She had been nedridden since the age of 12 after suffering a parasitic infection that “caused her limbs and body to swell”, according to Gulf News.

She said inquiries at local hospitals by her family went unanswered, but after her sister Chaymaa went public with the problem, they finally offered help.

Chaymaa said that their household consisted of herself, Iman and their mother and that their father had died when they were young.

Web articles – via partners/network co-ordinators. This website and its contents are the exclusive property of ANGA Media Corporation . We appreciate your feedback and respond to every request. Please fill in the form or send us email to: [email protected]
Previous: The end of the world has been postponed until October, Christian numerologists say
Next: Astronomers discover strange pair of asteroids with comet-like features