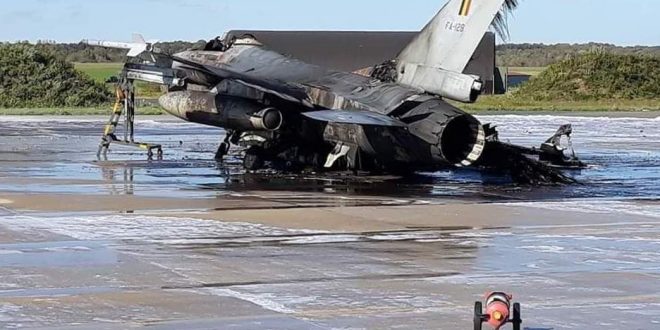 A Belgian Air Force F-16 has been destroyed and another aircraft damaged when the M61A1 Vulcan 20mm cannon on board a third F-16 was accidentally fired on the ground by maintenance personnel at Florennes Air Base in the Walloon area of Southern Belgium on Friday, Oct. 12, 2018.

Multiple reports indicate that a mechanic servicing the parked aircraft accidentally fired the six-barreled 20mm Vulcan cannon at close range to two other parked F-16s. Photos show one F-16AM completely destroyed on the ground at Florennes. Two maintenance personnel were reported injured and treated at the scene in the bizarre accident.

In a nearby hangar, positioned at the extension of the flight line, a technician was working on an F-16. It is said that by accident the six-barrel 20mm Vulcan M61A-1 cannon of that F-16 was activated. Apparently, the cannon was loaded and some ammunition hit the FA128. This aircraft had just been refuelled and prepared together with another F-16 for an upcoming afternoon sortie. After impact of the 20mm bullets, FA128 exploded instantly and damaged two other F-16s.

The airbase at Florennes is home to the Belgian 2nd Tactical Wing which comprises the 1st ‘Stingers’ Squadron and the 350th Squadron.

A report on F-16.net said that, “An F-16 (#FA-128) was completely destroyed while a second F-16 received collateral damage from the explosions. Two personnel were wounded and treated at the scene. Injuries sustained were mainly hearing related from the explosion.”

The news report published late Friday went on to say, “The F-16 was parked near a hangar when it was accidentally fired upon from another F-16 undergoing routine ground maintenance. Several detonations were heard and thick black smoke was seen for miles around. Civilian firefighters have even been called in to help firefighters at the airbase to contain the incident. About thirty men were deployed on site and several ambulances were dispatched. The Aviation Safety Directorate (ASD) is currently investigating the exact cause.”

The accident is quite weird: it’s not clear why the technician was working on an armed aircraft that close to the flight line. Not even the type of inspection or work has been unveiled. For sure it must have been a check that activated the gun even though the aircraft was on the ground: the use of the onboard weapons (including the gun) is usually blocked by a fail-safe switch when the aircraft has the gear down with the purpose of preventing similar accidents.

It is the second time this year an accidental discharge of live aircraft weapons has happened in Europe. On Aug. 7, 2018, a Spanish Air Force Eurofighter Typhoon accidentally launched an AIM-120 Advanced Medium Range Air to Air Missile (AMRAAM) while on an air policing mission near Otepää in Valga County, southern Estonia. The incident occurred only 50km from the Russian border.

A report ten days after the incident said the search for the missing weapon was called off. The missile was never located. “All the theoretical impact points of the missile have now been carefully searched,” said Commander of the Estonian Air Force Col. Riivo Valge in an EDF press release.

”Over the past two weeks, we employed three helicopters, five ground patrols and fifty-strong units of personnel to undertake the search on the ground. We also got help from the Rescue Board (Päästeamet) Explosive Ordnance Disposal Centre and used Air Force drones in the search,” Col. Valge added.

“Despite our systematic approach and actions the location of the impacted missile has not been identified and all probable locations have been ruled out as of now,” Col. Valge concluded in the August 17, 2018 media release ten days after the missile was accidentally fired.

Because strict weapons safety protocols, especially with live ammunition, are in place during ground handling it is extremely rare for maintenance personnel to accidentally discharge an aircraft’s weapon.

Web articles – via partners/network co-ordinators. This website and its contents are the exclusive property of ANGA Media Corporation . We appreciate your feedback and respond to every request. Please fill in the form or send us email to: [email protected]
Previous: Michael Rotondo: Judge orders man to move out of parents’ house
Next: California fires utility customers May Be on Hook for Billions