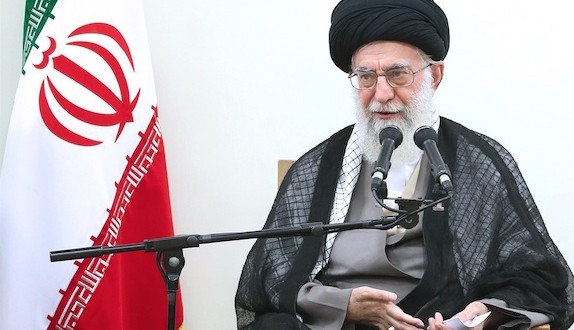 Ayatollah Ali Khamenei : Israel Will No Longer Exist in 25 Years

Iran’s Supreme Leader Ayatollah Ali Khamenei vowed today that Israel won’t exist in 25 years, and in the time leading up to that the Jewish state will have “no moment of serenity.”

“I’d say [to Israel] that they will not see [the end] of these 25 years,” Khamenei said, referring to the period that inspections of Iran’s nuclear program will continue, according to the Israeli newspaper Haaretz. “God willing, there will be no such thing as a Zionist regime in 25 years. Until then, struggling, heroic and jihadi morale will leave no moment of serenity for Zionists.”

The statements, made in front of hundreds of Iranians in Tehran, appear to contrast with the more conciliatory tone of President Hassan Rouhani.

The nuclear deal has come under heavy scrutiny from hard-liners in Iran, who view it as bowing to American will in the region. Khamenei said during the Wednesday address that he approved negotiations with the U.S. over the country’s nuclear program only for “specific reasons,” and would not be willing to negotiate on other issues with the U.S.

“The Americans are not hiding their animosity towards Iran … Americans in the Congress are plotting and passing bills against us… Negotiations are a tool for them to influence Iran and to impose their will,” Khamenei said to hundreds of visitors to his offices, according to Reuters.

U.S. President Barack Obama recently succeeded in securing the votes necessary to ensure the nuclear deal passes through Congress, despite heavy protest by Republicans. Opponents of the deal point to fiery rhetoric by Iran’s leaders as proof the Iranian regime cannot be trusted to abide by the agreement. Hard-liners in Iran have similarly pointed toward American rhetoric and foreign policy as proof that the U.S. should not be negotiated with.

The deal would see a gradual lifting of international sanctions that have crippled Iran’s economy in exchange for an Iranian commitment to cease its nuclear program. Secretary of State John Kerry has said the deal would open the door to negotiating with Iran on a range of other regional and security issues, a prospect that Khamenei seemed to rule out during his Wednesday address.

Web articles – via partners/network co-ordinators. This website and its contents are the exclusive property of ANGA Media Corporation . We appreciate your feedback and respond to every request. Please fill in the form or send us email to: [email protected]
Previous: Voldemort Pronunciation: JK Rowling Confirms You’ve Been Saying This “Harry Potter” Character’s Name Wrong
Next: Donald Trump Criticizes Carly Fiorina’s Looks: “Look At That Face!”