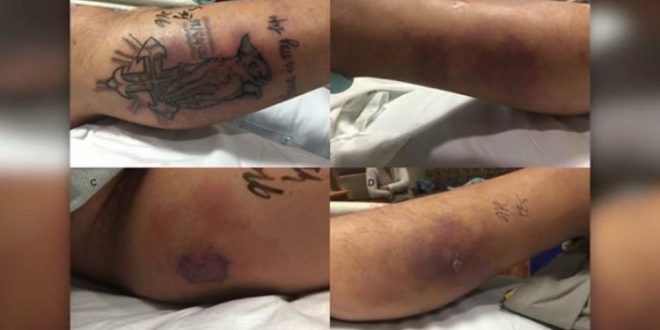 ​A 31-year-old man died after swimming with a fresh tattoo and developing sepsis.

The unidentified Hispanic man reportedly ignored the advice of people who told him to wait two weeks before going into pools or bodies of water.

After being exposed to subsequent amounts of seawater, the man’s tattoo became contaminated and he developed a fever, chills and a rash. His condition then deteriorated and he was admitted to hospital – by which time his leg was purple – with suspected Vibrio vulnificus infection. Doctors reportedly believed his history of heavy drinking had left him more susceptible to the infection due to the weakness in his liver.

Within 24 hours he was on life support after his body began to attack its own organs and he suffered organ failure, according to the British Medical Journal Case Report.

Despite battling septic shock for two weeks, his kidneys failed completely and he tragically succumbed to the infection.

Web articles – via partners/network co-ordinators. This website and its contents are the exclusive property of ANGA Media Corporation . We appreciate your feedback and respond to every request. Please fill in the form or send us email to: [email protected]
Previous: Researchers detect Einstein’s gravitational waves for a third time
Next: Google Home to hit Canada on June 26th, English and French support in Assistant