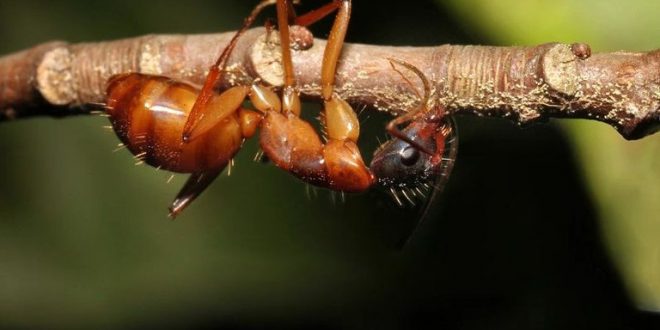 A parasitic ‘zombie’ fungus controls its ant hosts to die outside their nest so it can find fresh prey easily, Penn State researchers have found.

Instead, Ophiocordyceps unilateralis sensu lato — a complex of species sometimes called “zombie ant fungus” — surrounds and invades muscle fibers throughout the ant’s body, and fungal cells form a 3-D network that may enable them to collectively control host behavior, the researchers said.

Previous research showed that this species-specific parasite controls the behavior of carpenter ant workers, compelling them to climb vegetation and bite into the underside of leaves or twigs, where they die. As the fungus grows in the ant cadaver, it produces a stalk that protrudes from the ant’s head and discharges infectious spores onto the ground below, where they can infect other foraging ants.

“To better understand how such microbial parasites control animal behavior, we looked at cell-level interactions between the parasite and its carpenter-ant host at a crucial moment in the parasite’s lifecycle — when the manipulated host fixes itself permanently to vegetation by its mandibles,” said lead author Maridel Fredericksen, former master’s degree student in entomology at Penn State, now a doctoral candidate at the University of Basel Zoological Institute, Switzerland.

“The fungus is known to secrete tissue-specific metabolites and cause changes in host gene expression as well as atrophy in the mandible muscles of its ant host,” she said. “The altered host behavior is an extended phenotype of the microbial parasite’s genes being expressed through the body of its host. But it’s unknown how the fungus coordinates these effects to manipulate the host’s behavior.”

Using serial block-face scanning-electron microscopy, the team created 3-D visualizations to determine the distribution, abundance and interactions of the fungi inside the bodies of the ants. This use of the technology represented a breakthrough in the study of this parasite-host system, according to senior author David Hughes, associate professor of entomology and biology, Penn State.

Working with co-author Missy Hazen in the Microscopy and Cytometry Facility of Penn State’s Huck Institutes of the Life Sciences, researchers took slices of tissue at 50 nanometers and captured images of each slice, using a machine that could repeat that process 2,000 times over a 24-hour period.

“By stacking these slices, we could reconstruct them in 3-D, giving us a micron-level view of the interaction between the fungus and host, with incredibly high resolution,” Hughes said. “This is an unprecedented view of how a manipulator controls its host.”

To process that amount of data, the scientists then employed artificial intelligence (AI) and machine-learning algorithms to analyze the images.

“Our collaborators at Notre Dame were able to use deep learning to train computers to differentiate between fungal and ant cells so we could determine how much of the organism is ant and how much is fungus,” Hughes explained.

“The development of the cutting-edge, deep-learning model for identifying fungal and ant cells was complete and collaborative teamwork,” said Danny Chen, professor of computer science and engineering, University of Notre Dame. “The Penn State group produced a lot of labeled image data, which our group used for training, testing and improving our deep neural network model. It was really amazing to see how well biologists and AI researchers worked together to tackle this problem so effectively.”

The results, published in Proceedings of the National Academy of Sciences, showed that O. unilateralis s.l. cells were present throughout virtually all regions of the host ants’ bodies, including in the head, thorax, abdomen and legs. In addition, a large proportion of these fungal cells were connected, suggesting that they form a network to control the host’s behavior collectively.

“We found that a high percentage of the cells in a host were fungal cells,” said Hughes. “In essence, these manipulated animals were a fungus in ants’ clothing.”

“Normally in animals, behavior is controlled by the brain sending signals to the muscles, but our results suggest that the parasite is controlling host behavior peripherally,” Hughes said. “Almost like a puppeteer pulls the strings to make a marionette move, the fungus controls the ant’s muscles to manipulate the host’s legs and mandibles.”

Although the host brain isn’t invaded by fungal cells, previous work has shown that the brain may be chemically altered by the parasite, Hughes noted.

“We hypothesize that the fungus may be preserving the brain so the host can survive until it performs its final biting behavior — that critical moment for fungal reproduction. But we need to conduct additional research to determine the brain’s role and how much control the fungus exercises over it.”

Web articles – via partners/network co-ordinators. This website and its contents are the exclusive property of ANGA Media Corporation . We appreciate your feedback and respond to every request. Please fill in the form or send us email to: [email protected]
Previous: Is that a UFO in the sky? Mysterious disk-shaped object leaves residents baffled
Next: Researchers develop tiny ‘robot’ to spy on fish (Video)