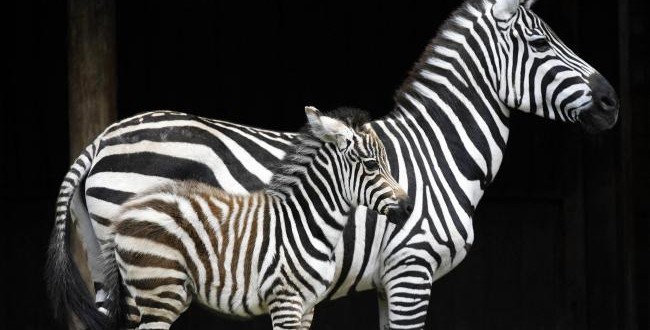 Zebra stripes provide protection from biting flies. The stripes are not a protection against predators as has been previously thought for several decades.

Amanda Melin, an assistant professor of biological anthropology at the University of Calgary in Canada, and colleagues are the first to show what zebra stripes are really for in the Jan 22, 2016, edition of the journal PLOS ONE.

“We, instead, carried out a series of calculations through which we were able to estimate the distances at which lions and spotted hyenas, as well as zebras, can see zebra stripes under daylight, twilight, or during a moonless night.”

Melin conducted the study with Tim Caro, a UC Davis professor of wildlife biology, Donald Kline, a professor emeritus of psychology from the University of Calgary, whose research is focused on vision and perception, and Chihiro Hiramatsu of Kyushu University, Japan.

In earlier studies, Caro and other colleagues have provided evidence suggesting that the zebra’s stripes provide an evolutionary advantage by discouraging biting flies, which are natural pests of zebras.

In the new study, Melin and her co-authors found that stripes cannot be involved in allowing the zebras to blend in with the background of their environment or in breaking up the outline of the zebra, because at the point at which predators can see a zebra’s stripes, they probably already have heard or smelled their zebra prey.

“The results from this new study provide no support at all for the idea that the zebra’s stripes provide some type of anti-predator camouflaging effect,” Caro said. “Instead, we reject this long-standing hypothesis that was debated by Charles Darwin and Alfred Russell Wallace.”

The zebra stripe riddle has puzzled scientists for over a century

To test the hypothesis that stripes camouflage zebras against the backdrop of their natural environment, the researchers passed digital images taken in the field in Tanzania through spatial and color filters that simulated how the zebras would appear to their main predators — lions and spotted hyenas — as well as to other zebras.

They also measured the stripes’ widths and light contrast, or luminance, in order to estimate the maximum distance from which lions, spotted hyenas and zebras could detect stripes, using information about these animals’ visual capabilities.

They found that beyond 50 meters in daylight or 30 meters at twilight, when most predators hunt, stripes can be seen by humans but are hard for zebra predators to distinguish. And on moonless nights, the stripes are particularly difficult for all species to distinguish beyond nine meters. This suggests that the stripes don’t provide camouflage in woodland areas, where it had earlier been theorized that black stripes mimicked tree trunks and white stripes blended in with shafts of light through the trees.

And in open, treeless habitats, where zebras tend to spend most of their time, the researchers found that lions could see the outline of striped zebras just as easily as they could see similar-sized prey with fairly solid-colored hides, such as waterbuck and topi, and the smaller impala. It had been earlier suggested that the striping might disrupt the outline of zebras on the plains, where they might otherwise be clearly visible to their predators.

In addition to discrediting the camouflaging hypothesis, the study did not yield evidence suggesting that the striping provides some type of social advantage by allowing other zebras to recognize each other at a distance. While zebras can see stripes over somewhat further distances than their predators can, the researchers also noted that other species of animals that are closely related to the zebra are highly social and able to recognize other individuals of their species, despite having no striping to distinguish them.

Web articles – via partners/network co-ordinators. This website and its contents are the exclusive property of ANGA Media Corporation . We appreciate your feedback and respond to every request. Please fill in the form or send us email to: [email protected]
Previous: Windows 10’s Cortana Now Helps You Keep Promises You Make In Email
Next: Top 10 free and paid apps for the iPhone and iPad in Canada