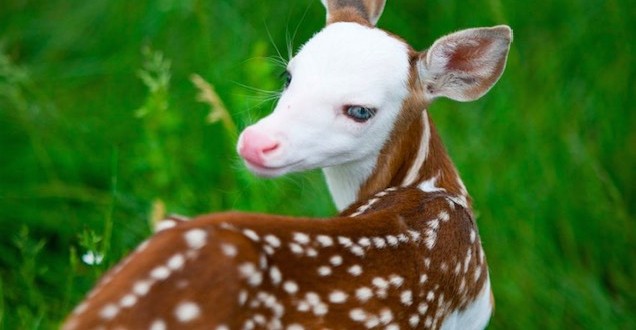 A rare white-faced deer has found a new loving home after being disowned by his mother.

The male fawn, named Dragon, was born about two weeks ago at Deer Tracks Junction farm on 14 Mile Road in Cedar Springs. Dragon is a rare type of whitetail deer known as the Piebald, which are recognized by their large brown and white spotting pattern that is caused by a genetic defect.

The defect affects less than 1 percent of the whitetail deer population and makes it difficult for them to blend into nature and hide from predators.

Dragon was rejected by his mom “Bunny” after he was born, most likely because he looked different than other fawns.

Since then, the owners of Deer Tracks Junction have been bottle feeding him. They expect Dragon to be able to join the other deer in a fenced-in pasture sometime later this summer.

Deer Tracks Junction is a working farm that offers educational opportunities for children and families.

Web articles – via partners/network co-ordinators. This website and its contents are the exclusive property of ANGA Media Corporation . We appreciate your feedback and respond to every request. Please fill in the form or send us email to: [email protected]
Previous: Caitlyn Dog Recovery : Surgery a success for dog found with muzzle taped shut (Video)
Next: 20-foot gigantic shark fossils found in Texas