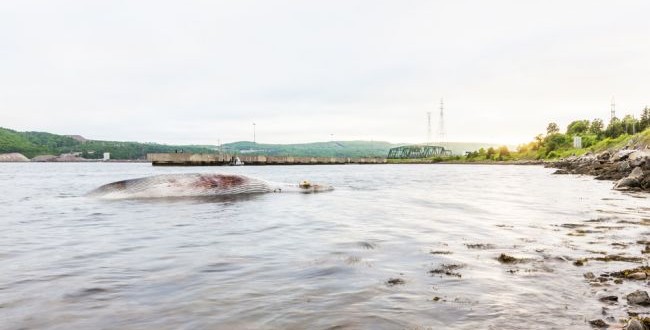 Some whale experts are trying to figure out what to do with the remains of a 14-metre fin whale that was found along the shores of Port Hastings, N.S. last week.

The whale is now beached just a few hundred metres from the Canso Causeway’s swing bridge, and a group from the Marine Animal Rescue Society has travelled to Port Hastings to see it.

“It definitely did not die of old age as it was 55 feet long, and when full sized they can get up to 90 feet,” said Reid. “We would like to do a full necropsy to see it there are any broken bones that could indicate a ship strike or any other damage or sickness in its organs.”

Reid said the length of the whale indicates it was probably a juvenile.

With the carcass now partially accessible, the Marine Animal Response Society was able to take pictures, tissue samples and measurements of blubber thickness in an effort to get an idea of what happened to the whale.

Reid said the fate of the decomposing carcass is still uncertain.

“Ideally, we would like to do a full examination and then dispose of the body, but that is a costly measure,” said Reid, who estimated the cost could be as high as $10,000.

There have also been reports that the rotting carcass is responsible for some unpleasant smells for people arriving on Cape Breton.

“It smells horrible and as soon as you cross the causeway you can notice it,” said Reid.

“It decomposed quite rapidly over the weekend with the storm and then the warm weather.”

The Cape Breton Post was unable to reach officials with the Municipality of Inverness for comment on the possible removal of the whale.

Web articles – via partners/network co-ordinators. This website and its contents are the exclusive property of ANGA Media Corporation . We appreciate your feedback and respond to every request. Please fill in the form or send us email to: [email protected]
Previous: Vancouver : Here’s your chance to name a baby orca
Next: Ancient human ancestors had Neanderthal ears, researchers say