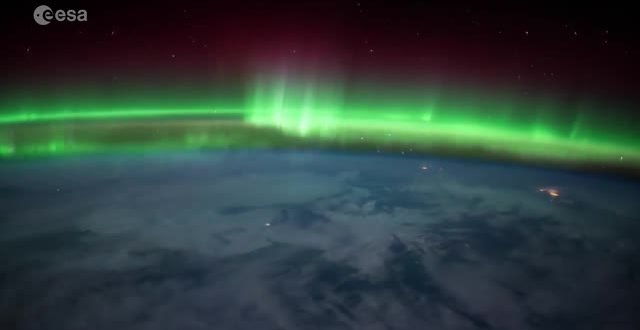 Paolo Nespoli, an astronaut on the International Space Station (ISS) has shared some stunning footage of the Aurora Australis, otherwise known as the southern lights.

The result is a downward view of the aurora borealis that flips the very concept of stargazing upside down — not to mention one of the most radiant displays of the green, streaking light-show visible to the naked eye.

Nespoli’s video is actually the product of 711 individual photos shot on September 15 and subsequently pieced together. It didn’t come at a random time, because September has been a month to remember as far as solar flares are concerned. The Sun released its most powerful flare in over a decade on September 6, triggering a day’s long avalanche of geomagnetic storms on Earth that painted a visual feast across much of the American sky. Nespoli was just there for the cosmic party.

While people in several states, including Washington, Idaho, Montana, North and South Dakota, Iowa, and Minnesota, were able to catch glimpses of the Northern Lights during its unprecedented show this month, it’s likely that the Sun won’t belch fire like this again in its current 11-year cycle. For everyone else not willing to wait another decade, or without proper astronautical credentials, you can always book a ticket to Scandinavia or Iceland.

Web articles – via partners/network co-ordinators. This website and its contents are the exclusive property of ANGA Media Corporation . We appreciate your feedback and respond to every request. Please fill in the form or send us email to: [email protected]
Previous: Woman bitten three times by copperhead snake at restaurant
Next: Hundreds of sharks spotted off NSW north coast (Video)