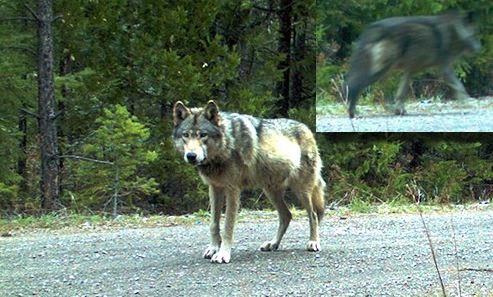 Wandering wolf may have found mate

Posted by: News May 13, 2014 in Press Releases, Science Leave a comment

OR-7, the wolf who captivated wildlife-loving Californians when he started wandering into California in 2011, has been spending time in the vicinity of a female wolf in the Rogue River-Siskiyou National Forest in southwestern Oregon this month, and data from his radio transmitter indicates the two may have denned there, according to an alert on the Oregon Department of Fish and Wildlife website.

In early May, remote cameras on the Rogue River-Siskiyou National Forest captured several images of what appears to be a black female wolf in the same area where OR7 is currently located. The images were found by wildlife biologists when they checked cameras on May 7.

The remote cameras were set up by U.S. Fish and Wildlife Service and Oregon Department of Fish and Wildlife as part of ongoing cooperative wolf monitoring efforts. New images of OR7 were also captured on the same cameras and can be accessed and viewed at ODFW’s wolf photo gallery (see first three images).

“This information is not definitive, but it is likely that this new wolf and OR7 have paired up. More localized GPS collar data from OR7 is an indicator that they may have denned,” said John Stephenson, USFWS wolf biologist. “If that is correct, they could be rearing pups at this time of year.”

The Service and ODFW probably won’t be able to confirm the presence of pups until June or later, the earliest pup surveys are conducted, so as not to disturb them at such a young age. Wolf pups are generally born in mid-April, so any pups would be less than a month old at this time.

If confirmed, the pups would mark the first known wolf breeding in the Oregon Cascades since the early 20th century.

Wolf OR7 is already well-known due to his long trek and his search for a mate—normal behavior for a wolf, which will leave a pack to look for new territory and for a chance to mate. “This latest development is another twist in OR7’s interesting story,” said Russ Morgan, ODFW wolf coordinator.

The Service and ODFW will continue to monitor the area to gather additional information on the pair and possible pups. That monitoring will include the use of remote cameras, DNA sample collection from scats found, and pup surveys when appropriate.

At the end of last year, there were 64 known wolves in Oregon. Except for OR7, most known wolves are in the northeast corner of the state.

Other wolves have travelled further, and other uncollared wolves may have made it to California. But OR7’s GPS collar, which transmits his location data several times a day, enabled wildlife managers to track him closely.

Since March 2013, OR7 has spent the majority of his time in the southwest Cascades in an area mapped on ODFW’s website.

Web articles – via partners/network co-ordinators. This website and its contents are the exclusive property of ANGA Media Corporation . We appreciate your feedback and respond to every request. Please fill in the form or send us email to: [email protected]
Previous: Managing Concussion Symptoms, Study
Next: Steve Carell Police Comedy Starring Rashida Jones, Report