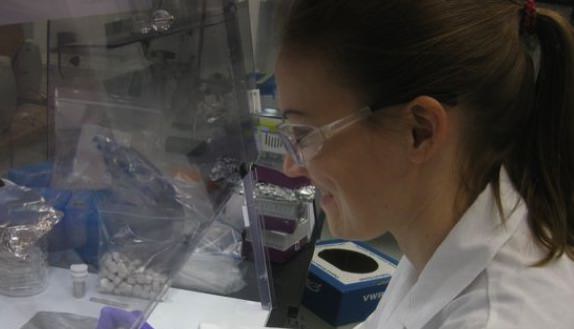 Vitamins B3 found in Meteorites, Study

Vitamins B3 found in Meteorites, Study

The theory that life, or at least the basic components of life, arrived on Earth from space during comet and meteor impacts got a boost this week. Researchers in a NASA-funded study found evidence that vitamin B3, also known as niacin, may have been originally delivered to Earth by a carbon-rich meteorite.

Working at Goddard’s Astrobiology Analytical Laboratory, Pennsylvania State University’s Karen Smith and associates analyzed eight CM-2 type carbonaceous chondrites or carbon-rich meteorites. The researchers found that the samples were rich in vitamin B3, pyridine carboxylic acids and pyridine dicarboxylic acids. The B3 levels of the meteorites ranged from 30 to 600 parts-per-billion.

“Vitamin B3 is essential to metabolism and likely very ancient in origin,” lead study author Karen Smith of Pennsylvania State University said in a statement.

Smith and her co-authors discovered vitamin B3 in eight carbon-rich meteorites. (When fragments of an asteroid fall to Earth, they’re called meteorites.) The meteorites are all CM-2 carbonaceous chondrites, one of the most common meteorite types found on Earth.

The researchers also tested their theory of how vitamin B3 may form in space with laboratory experiments. “We showed that the synthesis of vitamin B3 might be possible on ice grains,” Smith said.

Earlier research has also shown vitamin B3 can be produced non-biologically on Earth, Smith said. The team plans further experiments to explore how the vitamin can form on ice grains in space.

Web articles – via partners/network co-ordinators. This website and its contents are the exclusive property of ANGA Media Corporation . We appreciate your feedback and respond to every request. Please fill in the form or send us email to: [email protected]
Previous: US FDA Approves Lilly’s Gastric Cancer Drug – Quick Facts
Next: Frozen breaks records, Highest Animated Int’l Grosser Of All Time