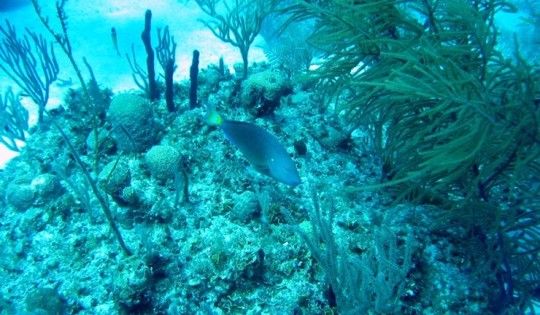 More than a mile beneath the ocean’s surface, as dark clouds of mineral-rich water billow from seafloor hot springs called hydrothermal vents, unseen armies of viruses and bacteria wage war.

Like pirates boarding a treasure-laden ship, the viruses infect bacterial cells to get the loot: tiny globules of elemental sulfur stored inside the bacterial cells.

Instead of absconding with their prize, the viruses force the bacteria to burn the valuable sulfur reserves, then use the unleashed energy to replicate, eventually filling the bacterial cells to the bursting point.

However, this new study, published in the journal Science, marks the first observation of that process in ecosystems thriving on the nutrient-rich, scalding hot water of deep ocean vents.

“Viruses play a cardinal role in biogeochemical processes in the ocean’s shallow and mid-to-deeper waters,” says David Garrison, program director in the National Science Foundation’s Division of Ocean Sciences, which funded the research.

“This study suggests that viruses may have a similar importance in deep-sea thermal vent environments.”

Ironically for the bacteria, known as SUP05, the viruses seem to use a version of the bacteria’s own genetic code to hijack the microorganisms. At some time in the evolutionary history of SUP05 and its viral attacker, there may have been an exchange of genes between the two, sugges the study’s authors.

“There seems to have been an exchange of genes, which implicates the viruses as an agent of evolution. That’s interesting from an evolutionary biology standpoint.”

Web articles – via partners/network co-ordinators. This website and its contents are the exclusive property of ANGA Media Corporation . We appreciate your feedback and respond to every request. Please fill in the form or send us email to: [email protected]
Previous: Thousands of premature deaths were preventable in US, CDC Reports
Next: Chronic marital stress may lead to happiness handicap, U.S. study says