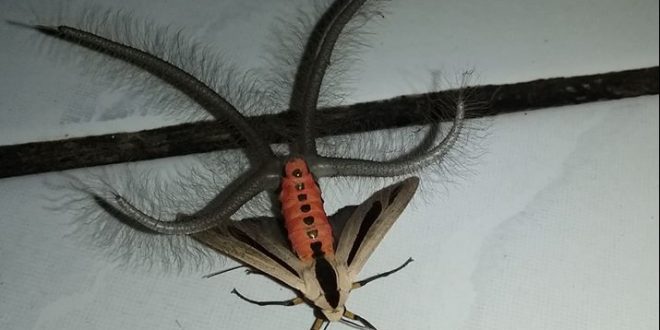 Footage of a mysterious moth-like insect flexing its pulsating tentacles has whipped the internet into a frenzy.

The video shows what appears to be a moth with a huge orange belly.

Attached to it are four enormous hairy tentacles which it is seen flexing in the air.

Thousands of people reacted in horror after the footage was shared on Facebook by Gandis this week.

It was revealed the creature is actually a Creatonotos gangis moth.

The four hairy tentacles are scent organs found on the abdomens of males and when inflated are used to produce pheromones to attract a mate.

Creatonotos gangis is a species of arctiid moth found in South East Asia and Australia.

Adults have white hindwings, and brown forewings, each with a dark streak, and a wingspan of 40 mm. The abdomen is red or, more rarely, yellow. The eggs are yellow and round, and are laid in rows on the leaves of food plants. The caterpillars are brown, hairy animals with a yellow stripe along the back, with a polyphagous diet.

Creatonotos gangis lives in South East Asia and parts of Australia. Its Asian distribution includes parts of China, India, Japan, Thailand and New Guinea. In Australia, it is restricted to northern parts of Western Australia, Northern Territory and Queensland, extending as far south as Mackay.

Adult males secrete the pheromone hydroxydanaidal in order to attract mates. The amount produced, and the size of the coremata (scent organs) which produce it, are however dependent on the diet that the moth experienced as a caterpillar. If the larval diet contained pyrrolizidine alkaloids, then the coremata become large and the male will release up to 400 miligrams(0.4 grams) of hydroxydanaidal, but if it does not, then the coremata do not grow large and no scent is produced.The larvae of C. gangis can cause extensive damage to the foliage of pomegranate trees.

Web articles – via partners/network co-ordinators. This website and its contents are the exclusive property of ANGA Media Corporation . We appreciate your feedback and respond to every request. Please fill in the form or send us email to: [email protected]
Previous: Tokyo Motor Show 2017: Nissan IMx concept revealed (Photo)
Next: New Research Confirms Three Methods for Controlling Your Dreams