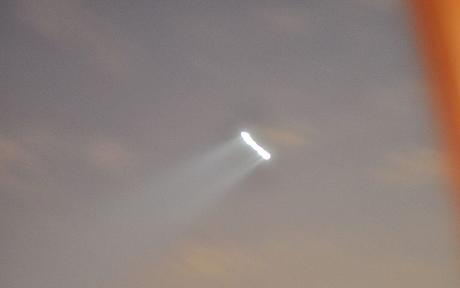 A paranormal investigator has appealed for witnesses on Facebook after a possible UFO sighting in Wales.

Gavin Davies spotted an unidentified cluster of lights in the sky over Haverfordwest in Wales on Thursday evening.

The Paranormal Chronicles website editor described the object as fast moving, with one larger bright light with two smaller lights around it and was heading east.

Gavin told the Carmarthen Journal: “My immediate suspicion was it was the International Space Station but I checked and it had already passed.”

Davies, who runs the Paranormal Chronicles website, told the Journal that he had received several responses from people who had spotted the object that night.

“It is literally a UFO,” he said. “I’m not saying it’s aliens but at this time we don’t know what it is.”

A post on the Paranormal Chronicles website said: “Reports suggest [the object] was too bright and large to be a Chinese lantern and [that it]made “drastic” course changes.

“No sound was heard coming from the object. The smaller lights “Buzzing” it have not been identified as of yet.

“If you have any information or able to get film or photographic documentation then please contact the Paranormal Chronicles at : [email protected]”

Web articles – via partners/network co-ordinators. This website and its contents are the exclusive property of ANGA Media Corporation . We appreciate your feedback and respond to every request. Please fill in the form or send us email to: [email protected]
Previous: ‘Top Model’ in Houston biopic
Next: Human remains found in Crocodile (video)