Home » Science » Titan’s Ocean Might Be as Salty as the Dead Sea, Study 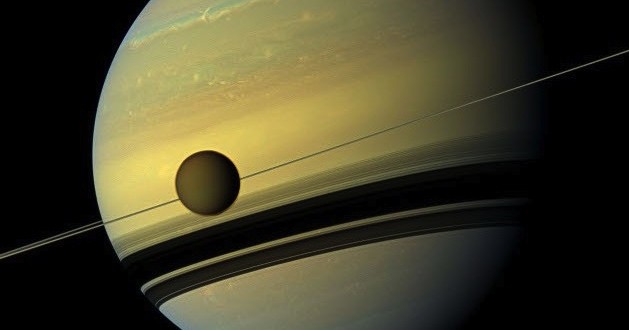 Titan's Ocean Might Be as Salty as the Dead Sea, Study

Titan’s Ocean Might Be as Salty as the Dead Sea, Study

The subsurface ocean inside Saturn’s largest moon, Titan, could be as salty as any body of water here on Earth, a new study reports.

Gravity data collected by NASA’s Cassini spacecraft suggest that Titan’s ocean must have an extremely high density. Salt water has a higher density than fresh water because the presence of salt adds more mass to a given amount of water.

“This is an extremely salty ocean by Earth standards,” lead author Giuseppe Mitri of University of Nantes, France, said.

“Knowing this may change the way we view this ocean as a possible abode for present-day life, but conditions might have been very different there in the past,” he added.

Titan is surrounded by an ice shell, but scientists believe below the surface there is an ocean of liquid water.

The average salt concentration in Earth’s oceans is around 3.5 percent, but parts of the Dead Sea can reach 40 percent salinity.

The Cassini mission was launched in 1997 and arrived in orbit around Saturn in 2004.

The mission also dropped a probe named Huygens onto the surface of Titan in January 2005.

Cassini collected gravity and topography data during its flybys of Titan, allowing researchers to create a new model of the structure of the moon’s outer icy shell.

The new model suggests that the thickness of the icy crust varies across the moon’s surface.

The new data could also provide some insight into Titan’s unique atmosphere, which is consistently around 5 percent methane.

Web articles – via partners/network co-ordinators. This website and its contents are the exclusive property of ANGA Media Corporation . We appreciate your feedback and respond to every request. Please fill in the form or send us email to: [email protected]
Previous: Coors Light : Beer promo closes Toronto intersection
Next: Scientists count e-cigarette puffs as part of $270m FDA project