Home » Science » Titanoboa : This monster snake had crocs for dinner ! 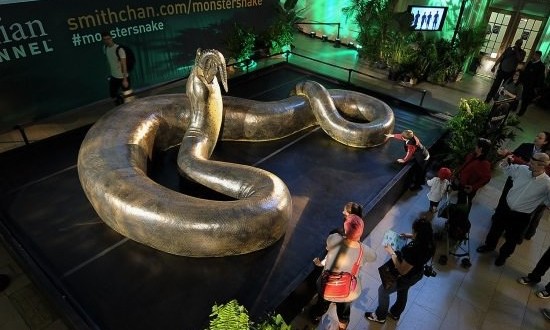 Titanoboa : This monster snake had crocs for dinner !

Titanoboa : This monster snake had crocs for dinner !

Titanoboa, a nearly 50 feet long gigantic snake that weighed 1,124 kilograms is by far the biggest snake to live on the planet, Earth.

The huge monster, which is 10 times the weight of an average anaconda, lived sixty million years ago in the muddy waters of Colombia. Titanoboa hunted for huge turtles, lungfish and even crocodiles, according to TOI report.

“It was so outsized that almost certainly it would have spent a large part of its time in water,” David Polly, a vertebrate paleontologist at Indiana University, was quoted as saying.

Titanoboa fossils were recovered from Cerrejon coal mine, located in the basin of the Rancheria river in Colombia.

Paleontologists found titanoboa fossils in the rocks built from the sediments.

A full body replica of the monster snake is on display at Smithsonian’s National Museum of Natural History.

Web articles – via partners/network co-ordinators. This website and its contents are the exclusive property of ANGA Media Corporation . We appreciate your feedback and respond to every request. Please fill in the form or send us email to: [email protected]
Previous: Sanofi, Lilly pursue Cialis over-the-counter approval, Report
Next: Vampire burial site found in Poland (Video)