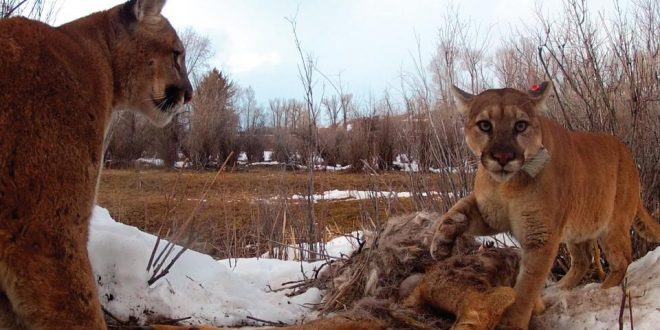 Pumas, or mountain lions, are mostly thought of as solitary cats — lone predators, stalking in the night. But new study suggests the felines are more social than previously thought.

Until now, scientists believed pumas interacted only to mate, settle territorial disputes and raise offspring. But a combination of GPS-equipped collars and motion-triggered cameras allowed a group of researchers with the University of California, Davis and the American Museum of Natural History to document hundreds of social interactions among mountain lions in northwest Wyoming.

“It’s the complete opposite of what we’ve been saying about pumas and solitary species for over 60 years,” said lead author and Panthera Puma Program Lead Scientist Mark Elbroch, Ph.D. “We were shocked — this research allows us to break down mythologies and question what we thought we knew.”

Usually termed “solitary carnivores,” pumas have been assumed to avoid each other, except during mating, territorial encounters, or when raising young. The population studied interacted every 11-12 days during winter — very infrequently compared to more gregarious species like meerkats, African lions, or wolves, which interact as often as every few minutes. So to document social behavior, Dr. Elbroch and his field research team had to follow pumas over longer time spans.

Using GPS technology and motion-triggered cameras in northwest Wyoming, the team collected thousands of locations from GPS-equipped collars and documented the social interactions of pumas over 1,000 prey carcasses (242 with motion-triggered cameras that filmed interactions). Then, they used cutting-edge analyses of puma networks to reveal that the species exhibits social strategies like more social animals, just over longer timescales. The research is the first to quantify complex, enduring, and “friendly” interactions of these secretive animals, revealing a rich puma society far more tolerant and social than previously thought.

“Our research shows that food sharing among this group of pumas is a social activity, which cannot be explained by ecological and biological factors alone,” said study co-author Mark Lubell, director of the UC Davis Center for Environmental Policy and Behavior.

Here’s a breakdown of the most surprising findings:

The study emphasizes that puma populations are actually composed of numerous smaller communities ruled by territorial males. The loss of males, whether by natural or human causes, potentially disrupts the entire social network.

Videos and images captured during the study served as “irrefutable” evidence of social behavior, Dr. Elbroch said. “Suddenly, I was able to see what was happening when these animals were coming together. By stepping back, we captured the patterns of behavior that have no doubt been occurring among pumas all along.”

Except for lions and cheetahs (whose males form long-term social groups), all wild cats are typically described as solitary — a strategy characteristic of species living in complex habitats where predators compete for dispersed prey. This study should encourage researchers to study the social behavior of other solitary carnivores.

“This work goes against convention for solitary carnivores, but our evidence is supported by both behavior and genetics,” said co-author Anthony Caragiulo, Assistant Director of Genomic Operations at the Sackler Institute for Comparative Genomics at the American Museum of Natural History.

Dr. Elbroch stated, “This opens the door to enormous possibilities. Are pumas everywhere behaving the same, or only in areas with large prey? Are other species like leopards and wolverines and so many others acting the same way? There is so much more to discover about the rich, secret social lives of wild creatures.”

Web articles – via partners/network co-ordinators. This website and its contents are the exclusive property of ANGA Media Corporation . We appreciate your feedback and respond to every request. Please fill in the form or send us email to: [email protected]
Previous: DNA Proves Ancient Diversity of Newfoundland, says new research
Next: CarbFix: Scientists turn CO2 into rock to combat climate change