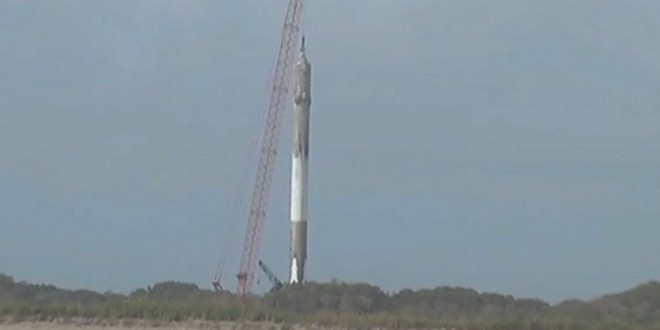 SpaceX made history as its Falcon 9 rocket blasted 11 satellites to orbit and successfully landed back down upright at Cape Canaveral, Florida.

The triumphant return of the reusable rocket after liftoff is a big step towards the reusability or recyclability of spacecraft, cutting the expense of space travel.

It was the first time an unmanned rocket returned to land vertically at Cape Canaveral, Florida, and represented a tremendous success for SpaceX.

The company, led by billionaire Elon Musk, is striving for re-usability to drive launch costs down and open up space to more people. “Welcome back, baby!” Musk tweeted after touchdown. “It’s a revolutionary moment,” Musk later told reporters.

“No one has ever brought a booster, an orbital-class booster, back intact.”

What’s significant is that this was a useful mission, Musk noted, not merely a practice flight. “I can’t quite believe it,” he said. “It’s quite shocking.”

Musk said the company “could not have asked for a better mission or a better day.”

Web articles – via partners/network co-ordinators. This website and its contents are the exclusive property of ANGA Media Corporation . We appreciate your feedback and respond to every request. Please fill in the form or send us email to: [email protected]
Previous: 3200 inmates released too early in Washington “Report”
Next: Quebec government wins challenge on assisted-dying law, Report