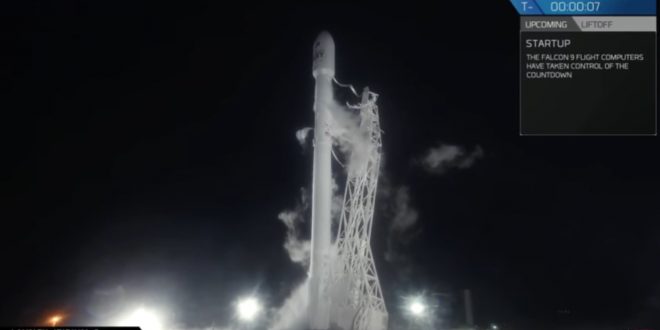 SpaceX launched 10 communication satellites into Earth low orbit on Monday, then watched its spent Falcon 9 first-stage rocket booster stick a landing on a drone ship in the Pacific Ocean.

The launch was the first of two planned this week by SpaceX.

Today’s Falcon 9 lifted off from Vandenberg Air Force Base in California at 5:37 a.m. PT, loaded up with satellites that are destined to become part of Iridium’s $3 billion next-generation constellation for broadband data services.

The constellation will eventually comprise 66 operational satellites, plus orbital spares. SpaceX sent up two earlier batches of 10, in January and June, as part of an eight-launch deal with Iridium.

Minutes after liftoff, the Falcon 9’s second stage separated and proceeded to orbit for satellite deployment. Meanwhile, the first stage fired up its engines and began a series of autonomously executed maneuvers, guiding itself back down toward “Just Read the Instructions,” a floating landing pad hundreds of miles off the California coast.

Over the hour that followed, the Falcon 9 second stage released Iridium’s satellites, one by one.

The Falcon 9’s liftoff was one of three launches scheduled in the course of 24 hours. It came a little more than eight hours after a Chinese Long March 2D rocket sent a Venezuelan imaging satellite into orbit, and a little less than 12 hours before a Japanese H-2A rocket was due to launch a navigation satellite to boost GPS service in Japan.

SpaceX is gearing up for another Falcon 9 launch on Wednesday, this time from Launch Complex 39A at NASA’s Kennedy Space Center in Florida. That mission is aimed at putting the SES-11/EchoStar-105 satellite into geostationary orbit to provide satellite TV and data services.

Web articles – via partners/network co-ordinators. This website and its contents are the exclusive property of ANGA Media Corporation . We appreciate your feedback and respond to every request. Please fill in the form or send us email to: [email protected]
Previous: Three people found dead in Nanaimo house fire, Police
Next: Formation of coal nearly turned Earth into a Giant Ball of Ice, says new research