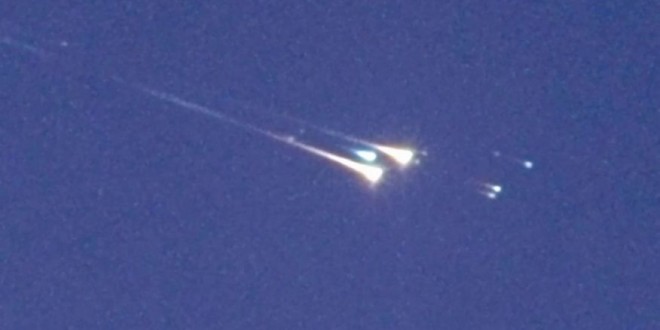 Scientists have identified a mysterious object that is hurtling toward Earth, falling from space, measuring some two meters or about 6.5 feet in diameter.

A Slooh spokesman said: “While there is no way to know exactly what the object is, scientists at the European Space Agency believe it is a piece of a rocket body falling back to Earth.

“Friday the 13th is going to be a lucky one for some scientists hoping to study the effects of our atmosphere on space junk.

“An object of unknown origin is expected to crash through the atmosphere and into the waters off the coast of Sri Lanka early Friday morning, and Slooh hope to have the first observations LIVE.

“Space junk falls from the sky pretty frequently, but this piece offers scientists a unique opportunity to observe and understand how the atmosphere interacts with them.

“Slooh will host a special broadcast taking a look at the first images of the object captured as it enters the atmosphere, and discussing what these objects are, how and why we track them, what kind of risk they pose to people on Earth and up in the International Space Station, and how this crash can help us better predict future impacts.”

The impact comes just two weeks after the Potentially Hazardous Asteroid 2015 TB145, or “Spooky”, whizzed past Earth on Halloween.

The object was expected to enter our atmosphere at about 6.40am GMT this morning, but the broadcast begins at 1pm (GMT) on Friday.

Web articles – via partners/network co-ordinators. This website and its contents are the exclusive property of ANGA Media Corporation . We appreciate your feedback and respond to every request. Please fill in the form or send us email to: [email protected]
Previous: Phil Taylor: Ex-Motorhead Drummer dies at “age 61”
Next: David Hasselhoff announces he’s now just David Hoff – This Is Why ‘Video’