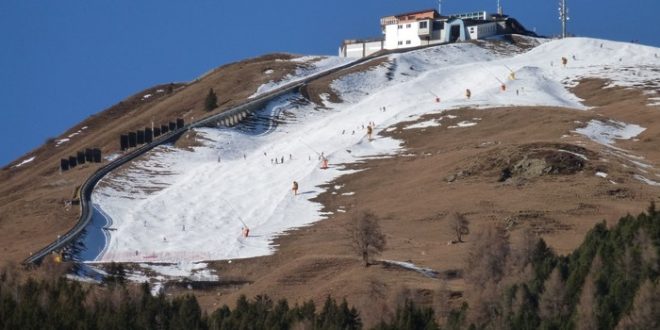 Snow to largely disappear from Alps by 2100, says new research

Snow to largely disappear from Alps by 2100, says new study

The Alps may lose 70 percent of snow cover by the end of the 21st century if humanity does not control global warming, says new research.

The new study, by researchers based at the Institute for Snow and Avalanche Research (SLF) and at the CRYOS Laboratory at the École Polytechnique Fédérale in Switzerland, shows that the Alps could lose as much as 70% of snow cover by the end of the century. However, if humans manage to keep global warming below 2°C, the snow-cover reduction would be limited to 30% by 2100.

In addition to the changes in snow cover, the new research reveals the Alpine winter season – the period when natural snow is deep enough for winter sports – is set to become shorter. The team say that, as temperatures rise, the ski season could start half a month to a month later than it does at present. Moreover, if we don’t cut emissions, enough snow for winter sports can only be guaranteed above 2500 m by the end of the century.

“The Alpine snow cover will recede anyway, but our future emissions control by how much,” explains lead-author Christoph Marty, a research scientist at SLF.

By simulating future snow cover in the Alps for various temperature and snowfall projections, the team was able to make more robust projections of how Alpine snow will change in the future, and how sensitive this change will be to different global-warming scenarios. Co-author Sebastian Schlögl, also from SLF, explains: “We used meteorological data and many different climate change scenarios to model the future snow cover in two Alpine catchments with ALPINE3D.” ALPINE3D is an open-source computer model designed to simulate how snow is distributed in mountainous regions.

The team’s projections show that the layer of snow covering the Alps will get less deep “for all elevations, time periods and emission scenarios,” they write in their The Cryosphere paper. “The most affected elevation zone for climate change is located below 1200 m, where the simulations show almost no continuous snow cover towards the end of the century.” About a quarter of the ski resorts in the Alps are located fully below this altitude, according to the skiresort.info website.

Ski resorts at higher altitude could also see drastic reductions in snow depth. If global warming isn’t limited to 2°C, snow depth could decrease by about 40% at the end of the century even for elevations above 3000 m. The Zugspitze, the highest mountain in Germany, has an altitude of 2962 m. The two highest ski resorts in the Alps, the French Aiguille du Midi in Chamonix, Mount Blanc and the Swiss-Italian Matterhorn ski paradise, have maximum elevations of about 3900 m and minimum heights of around 1000 m and 1500 m, respectively.

The decreasing snow depth and a shorter snow season will impact tourism in the Alps. “Since many Alpine villages are heavily dependent on winter tourism, the economy and society of regions with such tourism centres will suffer,” says Schlögl. In the long term, the increased rainfall in winter, the smaller snow cover and disappearing Alpine glaciers will alter how much water flows into Alpine creeks and rivers and how the water volume changes over time. “This will not only impact the ecology, but also the management of water for irrigation, power production or shipping,” he adds.

Despite these impacts, the new research highlights how much we could save in the Alps by mitigating climate change. “The fact that we lose 30% of the Alpine snow cover with the 2°C global warming scenario is sad, but at the same time encouraging compared to the 70% loss when we go on with business as usual,” concludes Marty.

Web articles – via partners/network co-ordinators. This website and its contents are the exclusive property of ANGA Media Corporation . We appreciate your feedback and respond to every request. Please fill in the form or send us email to: [email protected]
Previous: Canadian market extends record high, Report
Next: BlackBerry patent lawsuit filed against Nokia, Report