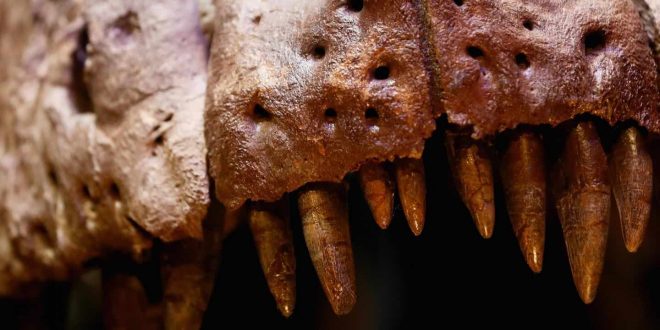 Tyrannosaurus Rex was one of the most fearsome dinosaurs that ever lived. And now scientists know why. Using advanced modeling techniques, they have found T-Rex could bite down with a force of 8,000 pounds. That’s equivalent to the weight of three small cars, and twice as strong as the largest crocodiles alive today.

Its long conical teeth could generate bone-crushing pressure of 431,000 pounds per square inch (PSI), or nearly 3 million kilopascals, according to the calculations of scientists from Florida State University and Oklahoma State University in the US.

The T. Rex combined a bite force twice that of the current world holders, crocodiles, with the bone-chewing power associated with carnivorous mammals such as wolves and hyenas, but not modern reptiles, explain Gregory Erickson and Paul Gignac in their study, published in Scientific Reports.

The T. Rex appears to be unique among reptiles for achieving this mammal-like ability.

It was this bone-crunching acumen, known as extreme osteophagy, Gignac suggests, that enabled T. Rex to consume the carcasses of other large dinosaurs “whose bones, rich in mineral salts and marrow, were unavailable to smaller, less equipped carnivorous dinosaurs”.

Erickson and Gignac derived their conclusions from testing and modeling how the musculature of crocodilians, close relatives of dinosaurs, contribute to bite forces. They then compared the results with birds, which are modern-day descendants of the dinosaurs, and generated a model for T. rex.

Web articles – via partners/network co-ordinators. This website and its contents are the exclusive property of ANGA Media Corporation . We appreciate your feedback and respond to every request. Please fill in the form or send us email to: [email protected]
Previous: Jeremy the lefty snail loses out to love rival (Photo)
Next: Turn off TV while eating to lose weight, Says New Study