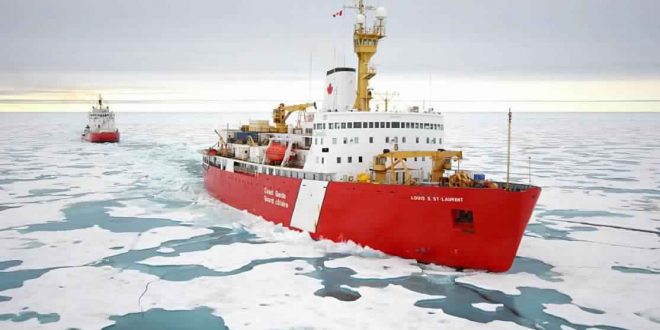 A Canadian Coast Guard icebreaker is set to embark on a 47-day expedition from Halifax Harbour to the North Pole to collect scientific information and much-needed data that could bolster the country’s claim to Arctic sovereignty.

The Canadian Hydrographic Service in collaboration with the government of Sweden will undertake a seabed mapping expedition during the voyage.

“The work of our scientists and researchers on this survey, in collaboration with our Swedish partners, is vital to improving our collective knowledge of the Arctic and supporting the science that enables sound, evidence-based decisions,” Canadian Minister of Natural Resources Jim Carr stated. “Our government is proud to support this important research to gather necessary data to help determine the outer limits of Canada’s continental shelf.”

Following the Norway leg of the trip, the Louis S. St-Laurent will collect data in the Canadian Basin, located in the western Arctic Ocean, in collaboration with US researchers.

It is Canada’s fifth expedition under the Atlantic Ocean Research Alliance, which involves Canada, the European Union and the United States.

Canada is one of the five Arctic nations — alongside Denmark, Norway, Russia and the United States — that have been laying claims to hydrocarbon deposits located in its offshore Arctic border areas.

The Law of the Sea was created by the United Nations in 1982 and defines outer limit lines of continental shelf for coastal states and their exclusive economic zones.

Web articles – via partners/network co-ordinators. This website and its contents are the exclusive property of ANGA Media Corporation . We appreciate your feedback and respond to every request. Please fill in the form or send us email to: [email protected]
Previous: Meet Murusraptor: New ‘Giant Thief’ dinosaur discovered
Next: It’s Tick Season: Protecting Yourself Against Lyme Disease