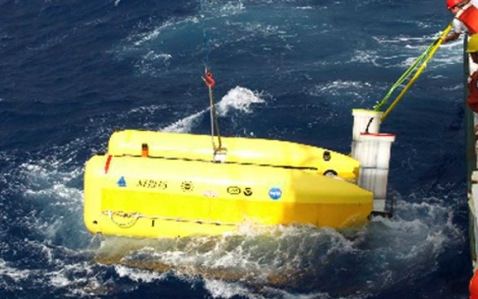 Posted by: News May 12, 2014 in Press Releases, Science Leave a comment

On Saturday, May 10, 2014, at 2 p.m. local time (10 p.m. Friday EDT), the hybrid remotely operated vehicle Nereus was confirmed lost at 9,990 meters (6.2 miles) depth in the Kermadec Trench northeast of New Zealand. The unmanned vehicle was working as part of a mission to explore the ocean’s hadal region from 6,000 to nearly 11,000 meters deep. Scientists say a portion of it likely imploded under pressure as great as 16,000 pounds per square inch.

Nereus was built in 2008 by the Deep Submergence Lab at the Woods Hole Oceanographic Institution (WHOI) with primary funding from the U.S. National Science Foundation (NSF) to descend to the deepest parts of the ocean and to operate either autonomously or to be controlled remotely from the surface. WHOI engineers incorporated a number of novel technologies into its design for use in remote operations, including an optical fiber tether for use in remote operations, ceramic flotation, and lithium-ion batteries. Its mission was to undertake high-risk, high-reward research in the deepest, high-pressure parts of Earth’s ocean. At the time it was lost, it was 30 days into a 40-day expedition on board the research vessel Thomas G. Thompson to carry out the first-ever, systematic study of a deep-ocean trench as part of the NSF-sponsored Hadal Ecosystems Study (HADES) project under chief scientist Timothy Shank, a WHOI biologist who also helped conceive the vehicle.

“Nereus helped us explore places we’ve never seen before and ask questions we never thought to ask,” said Shank. “It was a one-of-a-kind vehicle that even during it’s brief life, brought us amazing insights into the unexplored deep ocean, addressing some of the most fundamental scientific problems of our time about life on Earth.”

Researchers on the Thompson lost contact with the vehicle seven hours into a planned nine-hour dive at the deepest extent of the trench. When standard emergency recovery protocols were unsuccessful, the team initiated a search near the dive site. The team onboard spotted pieces of debris floating on the sea surface that were later identified as coming from Nereus, indicating a catastrophic implosion of the vehicle. The ship’s crew is recovering the debris to confirm its identity and in the hope that it may reveal more information about the nature of the failure.

In addition to the Kermadec Trench, Nereus had successfully traveled to Challenger Deep in the Mariana Trench—the deepest point in the ocean—and explored the world’s deepest known hydrothermal vents along the Cayman Rise in the Caribbean Sea. It had been scheduled to return to the Mariana Trench in November as part of the second HADES expedition. Already on the first HADES cruise, Nereus had brought back to the surface specimens of animals previously unknown to science and seafloor sediment destined to help reveal the physical, chemical, and biological processes that shape the deep-ocean ecosystems in ocean trenches, which are unlike almost any others on the planet.

WHOI is a leader in the development of autonomous robotic vehicles for the exploration of the ocean, including the hybrid vehicle Nereus, which functioned as a remotely operated vehicle via an optical fiber tether and also as a free-swimming autonomous vehicle. It was one of only four submersibles in history to reach the deepest part of the ocean in the Marianas Trench.

“Extreme exploration of this kind is never without risk, and the unfortunate loss of Nereus only underscores the difficulty of working at such immense depths and pressures,” said WHOI Director of Research Larry Madin. “Fortunately there was no human injury as a consequence of this loss. WHOI scientists and engineers will continue to design, construct and operate even more advanced vehicles to explore and understand the most remote and extreme depths of our global ocean.”

In addition to NSF support, funding for Nereus also came from the Office of Naval Research, the National Oceanic and Atmospheric Administration, the Russell Family Foundation, and WHOI.

“We are grateful to our partners for helping build such a breakthrough technological innovation in deep-ocean exploration and to the many engineers, technicians, and scientists at WHOI and around the world who helped realize our vision of a full-ocean-depth research vehicle,” said WHOI President and Director Susan Avery. “Nereus may be gone, but the discoveries it enabled and the things it helped us learn will be an indelible part of its legacy.”

Web articles – via partners/network co-ordinators. This website and its contents are the exclusive property of ANGA Media Corporation . We appreciate your feedback and respond to every request. Please fill in the form or send us email to: [email protected]
Previous: Monday marks 1st ‘Spare the Air’ day of 2014, Report
Next: 5 dead after van smashes into car in Hesperia, authorities say