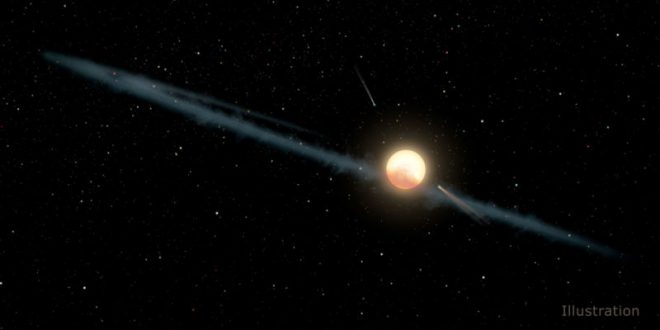 Researchers Have a New Theory to Explain 'Alien Megastructure' Star

Researchers Have a New Theory to Explain “Alien Megastructure” Star

Astronomers say they’ve found a smoking gun that rules out the idea of an energy-harvesting megastructure or Dyson sphere – built by an alien civilization – surrounding Tabby’s Star.

In recent years, a distant star in the constellation Cygnus, known officially as KIC 8462852 and unofficially as Tabby’s Star, has intrigued astronomers due to its irregular but significant dimming. As the star has faded by as much as 20 percent and then returned to its normal brightness, scientists were forced to admit that they didn’t have a good explanation for this behavior.

The theories they put forth to explain the dimming included some pretty exotic notions, such as some kind of super-large alien megastructure that passed in front of the star. Alas, astronomers using NASA’s Swift and Spitzer space-based observatories have come up with a much more prosaic explanation for the phenomenon—dust.

A new study in The Astrophysical Journal analyzed light data gathered across a broad swath of wavelengths collected between October, 2015 and December, 2016. The researchers found that the dimming effect was less pronounced in the infrared wavelengths of light than the ultraviolet light. This finding is consistent with the idea that dust particles would scatter more of the shorter wavelengths of ultraviolet light, while more of the longer wavelength infrared light would make it through a dust cloud.

“This pretty much rules out the alien megastructure theory, as that could not explain the wavelength-dependent dimming,” said Huan Meng, at the University of Arizona, Tucson, who is lead author of the new study. “We suspect, instead, there is a cloud of dust orbiting the star with a roughly 700-day orbital period.”

NASA’s Swift instrument, launched in 2004, was designed to study gamma ray bursts across a large portion of the spectrum. NASA’s Spitzer Space Telescope, launched in 2003, is highly sensitive to infrared light. To round out their observations, scientists also used data from AstroLAB IRIS, a public observatory with a 68cm reflecting telescope in Belgium.

Based upon the new data, circumstellar dust—dust that orbits a star—is now the best explanation for Tabby’s Star. This dust is large enough to remain in orbit around the star but not so large that it uniformly blocks light from all wavelengths. Around our own Sun, this dust causes the zodiacal light that can be seen on very dark nights near the horizon.

Web articles – via partners/network co-ordinators. This website and its contents are the exclusive property of ANGA Media Corporation . We appreciate your feedback and respond to every request. Please fill in the form or send us email to: [email protected]
Previous: Researchers discover five supermassive black hole pairs
Next: Prehistoric humans ‘avoided inbreeding’, scientists say