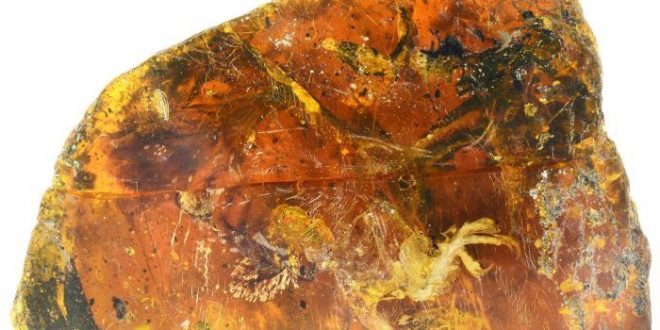 A team of researchers discovered the skeletal remains of an extinct bird inside a slab of 99-million-year-old amber while working in Myanmar between 2015 and 2016.

According to Xing Lida from China University of Geosciences, who is leading the research, the 9-centimeter-long specimen included most of the skull and neck, a partial wing and hindlimb, and soft tissue of the tail.

Xing said the proportions of body parts and form of the feathers indicated it was a very young and highly advanced hatchling, adding that the unusually detailed feathers revealed unexpected diversity in primitive birds.

“Many people thought it was a lizard. But the scales, thread-like feathers and sharp claws on the feet were so noticeable that I thought they must belong to a bird,” said Chen Guang, owner of the specimen and curator of a museum in Yunnan, the province that borders Myanmar.

“There were no obvious signs of struggle. The overall posture of the bird resembled hunting, with its lifted body, open claws and beak and spread wings,” said Tseng Kuowei with the University of Taipei. “It was possibly engulfed by falling resin at the exact moment it was hunting.”

The paper titled “A mid-Cretaceous enantiornithine (Aves) hatchling preserved in Burmese amber with unusual plumage,” co-authored by a group of Chinese, Canadian and American scientists, was published by Gondwana Research this month.

Web articles – via partners/network co-ordinators. This website and its contents are the exclusive property of ANGA Media Corporation . We appreciate your feedback and respond to every request. Please fill in the form or send us email to: [email protected]
Previous: 300000-Year-Old Homo Sapiens Fossils Uncovered in Morocco
Next: Kids who don’t drink cow’s milk are shorter, says new study