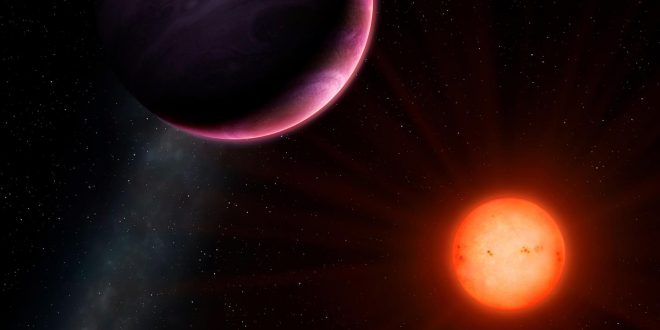 A GIANT planet the size of Jupiter has been discovered orbiting a star only half the size of the Sun, contradicting previous theories on planet formation.

The discovery of NGTS-1b challenges theories of planet formation, which states that a planet of this size could not be formed around such a small star because small stars cannot gather enough material together to form Jupiter-sized planets.

“The discovery of NGTS-1b was a complete surprise to us—such massive planets were not thought to exist around such small stars—importantly, our challenge now is to find out how common these types of planets are in the Galaxy and with the new Next-Generation Transit Survey facility we are well-placed to do just that,” Daniel Bayliss, Ph.D., a professor from the University of Warwick and lead author of the study.

The planet is considered a ‘hot Jupiter,’ a class of planets that are at least as large as the original Jupiter, but with around 20 percent less mass.

NGTS-1b is very close to its star—just 3 percent of the distance between Earth and the Sun.

However, the host star is small with a radius and mass about half of that of the Sun.

“Despite being a monster of a planet, NGTS-1b was difficult to find because its parent star is so small and faint,” professor Peter Wheatley from the University of Warwick, said in a statement. “Small stars like this red M-dwarf are actually the most common in the Universe, so it is possible that there are many of these giant planets waiting to found.”

They were able to use this data to track the planet’s orbit and calculate the size, position and mass of NGTS-1b by measuring the radial velocity of the star.

They also used this method to measure how much the star ‘wobbles’ due to the gravitational tug from the planet, the best way to measure the size of the nearby planet.

Web articles – via partners/network co-ordinators. This website and its contents are the exclusive property of ANGA Media Corporation . We appreciate your feedback and respond to every request. Please fill in the form or send us email to: [email protected]
Previous: Remains at Silver Creek farm those of missing Vernon woman Traci Genereaux
Next: Dinosaur-killing asteroid cooled Earth more than thought, scientists say