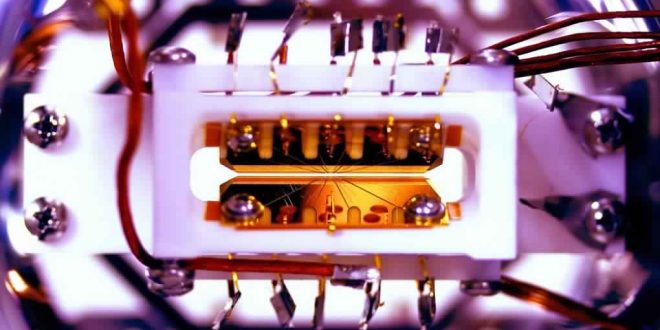 Scientists at the Joint Quantum Institute at the University of Maryland unveiled a first-of-its-kind fully programmable and reconfigurable quantum computer. The five-qubit machine, which is described in the journal Nature, represents a dramatic step toward general-purpose quantum computing—and, with it, an upending of what we can even consider to be computable.

At the heart of the device are just five electrically charged atoms, or ions, trapped in a magnetic field and vibrated by precisely targeted laser beams.

By manipulating the ions in ways that exploit their ability to be in more than one state at the same time – the essence of quantum computing – scientists were able to run programs that would be difficult or impossible for a conventional computer.

One involved performing a calculation in a single step that would normally require several stages.

Another demonstrated a quantum Fourier transform (QFT), a mathematical operation that could be used to break highly secure encryption codes.

Despite consisting of only five “qubits” – the quantum computing equivalent of “bits” of information – the researchers say their quantum computer “module” is highly flexible and could be scaled up.

US quantum physicist Professor Christopher Monrow, who led the University of Maryland team, said: “Very few people know what their iPhone is actually doing at the physical level.

“Our experiment brings high-quality quantum bits up to a higher level of functionality by allowing them to be programmed and reconfigured in software.”

Conventional computers use long strings of ones and zeroes representing “on” or “off” states to store numbers, letters and symbols and perform calculations.

In contrast, a quantum computer “qubit” can be a zero or a one or any combination of the two simultaneously.

This is due to the weird laws of quantum mechanics, through which sub-atomic particles live in a ghostly twilight world where there is no hard and fast “reality”, only a myriad possibilities.

They remain in a multiplicity of simultaneous states, known as “superpositions”, until they are observed or disturbed.

Only then do they collapse down into one state or another – just as a spinning coin turns up heads or tales when caught.

By using qubits, quantum computers could theoretically solve complex problems that would defeat the most powerful “classical” computers.

However, making quantum computers a practical reality is a huge challenge.

A number of devices have been built that generally perform just one function and cannot be programmed to run traditional software.

The new computer from the University of Maryland has taken quantum computing to a new level by being programmable.

The machine uses its laser-manipulated ytterbium ions to drive quantum “logic gates” – the equivalent of the switches and transistors that power ordinary computers.

It also exploits a strange quantum phenomenon called entanglement, allowing individual ions to lose their independence and behave as if they are part of a single system.

Three “algorithms”, sets of rules used to run a computer program, were tested on the device.

Two ran successfully more than 90% of the time while the QFT had a 70% success rate.

None of the errors involved were fundamentally insurmountable, said the researchers.

The study is reported in the latest issue of the journal Nature.

Web articles – via partners/network co-ordinators. This website and its contents are the exclusive property of ANGA Media Corporation . We appreciate your feedback and respond to every request. Please fill in the form or send us email to: [email protected]
Previous: Britney Spears Announces New Album, Glory “Video”
Next: University of Toronto researchers invent ‘vitamin-driven battery’