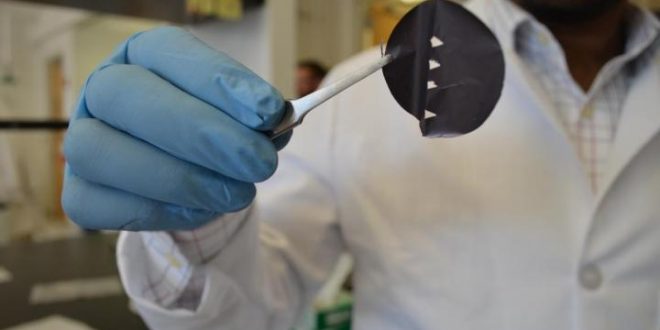 A group of researchers at Drexel University and the Korea Institute of Science & Technology has developed a new material called MXene to effectively block electromagnetic waves emanating from electronic gadgets and appliances.

“As technology evolves and electronics become lighter, faster and smaller, their electromagnetic interference increases dramatically,” said Babak Anasori, PhD, a research assistant professor in the A.J. Drexel Nanomaterials Institute, and a co-author of the paper “Electromagnetic Interference Shielding with 2D Transition Metal Carbides (MXenes),” which was recently published in the journal Science. “Internal electromagnetic noise coming from different electronic parts can have a serious effect on everyday devices such as cell phones, tablets and laptops, leading to malfunctions and overall degradation of the device.”

These effects range from temporary monitor “fuzziness,” strange buzzing from a Bluetooth device, to a slow in processing speed of a mobile device. Shielding against electromagnetic interference typically includes encasing the interior of devices with a shroud or cage of a conductive metal like copper or aluminum, or a coating of metallic ink. And while this is effective, it also adds weight to the device and is considered a restriction on how small the device can be designed.

“In general, adequate shielding can be achieved by using thick metals, however, material consumption and weight leave them at a disadvantage for use in aerospace and telecommunication applications,” Anasori said. “Therefore, it is of great importance to achieve better protection with thinner films.”

Their findings suggest that a few-atoms thin titanium carbide, one of about 20 two-dimensional materials in the MXene family discovered by Drexel University scientists, can be more effective at blocking and containing electromagnetic interference, with the added benefit of being extremely thin and easily applied in a coating just by spraying it onto any surface — like paint.

“With technology advancing so fast, we expect smart devices to have more capabilities and become smaller every day. This means packing more electronic parts in one device and more devices surrounding us,” said Yury Gogotsi, PhD, Distinguished University and Trustee Chair professor in the College of Engineering and Director of the A.J. Nanomaterials Institute who proposed the idea and led this research. “To have all these electronic components working without interfering with each other, we need shields that are thin, light and easy to apply to devices of different shapes and sizes. We believe MXenes are going to be the next generation of shielding materials for portable, flexible and wearable electronics.”

Researchers tested samples of MXene films ranging in thickness from just a couple micrometers (one-thousandth of a millimeter) up to 45 micrometers, which is slightly thinner than a human hair. This is significant because a material’s shielding effectiveness, a measure of a material’s ability to block electromagnetic radiation from passing through it, tends to increase with its thickness, and for purposes of this research the team was trying to identify the thinnest iteration of a shielding material that could still effectively block the radiation.

What they found is that the thinnest film of MXene is competing with copper and aluminum foils when it comes to shielding effectiveness. And by increasing thickness of the MXene to 8 micrometers, they could achieve 99.9999 percent blockage of radiation with frequencies covering the range from cell phones to radars.

In comparison to other synthetic materials, such as graphene or carbon fibers, the thin sample of MXene performed much better. In fact, to achieve commercial electromagnetic shielding requirements, currently used carbon-polymer composites would have to be more than one millimeter thick, which would add quite a bit of heft to a device like an iPhone, that is just seven millimeters thick.

The key to MXene’s performance lies in its high electrical conductivity and two-dimensional structure. According to the authors, when electromagnetic waves come in contact with MXene, some are immediately reflected from its surface, while others pass through the surface but they lose energy amidst the material’s atomically thin layers. The lower energy electromagnetic waves are eventually reflected back and forth off the internal layers until they’re completely absorbed in the structure.

One other result, that already portends MXene’s usefulness in protecting wearable devices, is that its shielding effectiveness is just as stout when it is combined with a polymer to make a composite coating. And, on weight basis, it even outperforms pure copper.

“This finding is significant since several commercial requirements for an electromagnetic interference shield product are engrained in a single material,” Gogotsi said. “MXene displays many of these characteristics, including high shielding effectiveness, low density, small thickness, high flexibility and simple processing. So it is an excellent candidate for use in numerous applications.”

Web articles – via partners/network co-ordinators. This website and its contents are the exclusive property of ANGA Media Corporation . We appreciate your feedback and respond to every request. Please fill in the form or send us email to: [email protected]
Previous: Samsung Is Working with Health Canada Regarding The Recall of the Samsung Galaxy Note7
Next: Heinz recalls baby food after choking incident, Report