Home » Science » Reef-eating starfish could be lured away by lust, finds new research 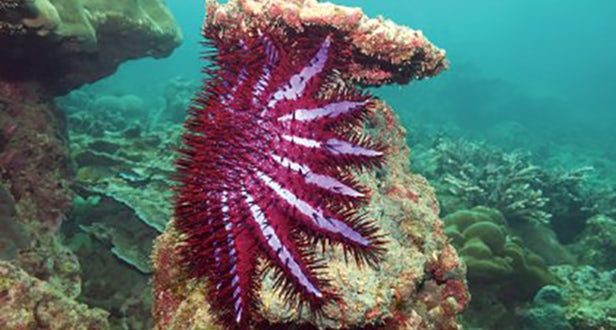 Reef-eating starfish could be lured away by lust, finds new research

Reef-eating starfish could be lured away by lust, finds new research

In a breakthrough, scientists have found a new way that could help protect Australia’s iconic Great Barrier Reef by using the powers of attraction to decimate one of the reef’s fiercest enemies.

Scientists at the University of Queensland in Australia have revealed that crown-of-thorns starfish gather in large numbers due to a release of pheromones — a scent they have decoded so the prickly pests can be lured to their capture.

Husband-and-wife Professor Bernard Degnan and Associate Professor Sandie Degnan, believe they, along with research colleagues, can use the powers of attraction to decimate one of the reef’s fiercest enemies.

In esteemed journal Nature, the international research team has revealed crown-of-thorns starfish gather en masse due to a release of pheromones – a scent they’ve decoded so the prickly pests can be lured to their capture.

“For an already struggling Great Barrier Reef, and indeed any reefs across the Indo-Pacific region, these starfish pose an enormous threat due to the ability of a single female to produce up to 120 million offspring in one spawning season,” Professor Bernard Degnan said.

“They feast on the coral and leave it bleached white and vulnerable to destruction in heavy storms.

“Millions of dollars have been spent over many years on a variety of ways to capture crown-of-thorns starfish, whether it be via diver collection, injections or robotics.

“Now we’ve found the genes the starfish use to communicate, we can begin fabricating environmentally safe baits that trick them into gathering in one place, making it easier to remove reproductively-primed animals.”

The Degnans worked alongside a team of UQ researchers, and long-standing colleagues at the Australian Institute of Marine Science (AIMS), the Okinawa Institute of Science and Technology (OIST) and University of the Sunshine Coast (USC).

The painstaking process of sequencing the crown-of-thorns genome and its pheromones was completed 30 years after Professor Degnan moved from his hometown of New York to Brisbane to study as one of UQ’s first international exchange students.

A graduate in Marine Biology and Molecular Biology, Professor Degnan developed an early fascination with the biodiversity of Queensland’s Great Barrier Reef in his formative years, and while at UQ’s Heron Island Research Station he met his future wife.

“I guess there is a nice story there about the reef bringing us together and now we’re working hard to develop novel ways to understand and preserve it,” Professor Bernard Degnan said.

“But beyond us, there’s personal history with some of the other researchers, like Mike Hall at AIMS who is one of our oldest colleagues and who came up with the original genome concept.

“Nori Satoh at OIST could be considered the grandfather of marine genomics and has been a very supportive friend, as has Scott Cummins of USC, who was a former research fellow in my lab.

“What I like most is that we’re finding a solution to a problem, not merely documenting it.”

Beyond the role their genomics breakthrough brings to controlling the crown-of-thorns, the Degnans believe it could have other environmental and economical benefits.

They say a similar approach could be used to combat invasions of sea snails and other marine pests throughout the world.

For fishermen and coastal communities, that’s a win on several fronts.

“I expect for local economies there could be some positive cash flow from the fishermen that collect and remove the crown-of-thorns,” Professor Bernard Degnan said.

“Furthermore, as the reef becomes healthier, the benefits to a raft of industries from tourism to fisheries quickly follow.”

The crown-of-thorns research is available in full via the Nature journal.

Web articles – via partners/network co-ordinators. This website and its contents are the exclusive property of ANGA Media Corporation . We appreciate your feedback and respond to every request. Please fill in the form or send us email to: [email protected]
Previous: Researchers Discover GJ 1132b Planet With Earth-like Atmosphere
Next: Pet germs can keep your baby healthy, Says New Study