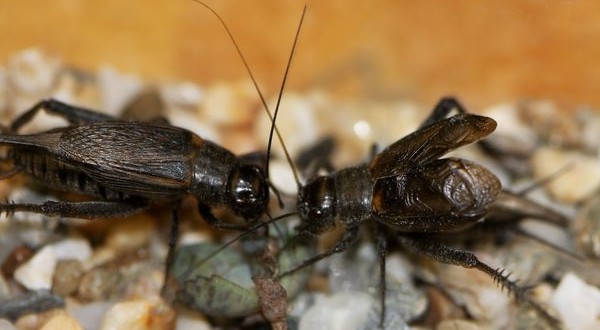 If going to bed to the chirping of crickets is what you fantasize about during your vacation, then heading to the Hawaiian islands Kauai and Oahu may not be a good idea. Male crickets in these two islands have lost their ability to chirp.

They have developed flatwings as a result of separate, but simultaneous, evolutionary adaptation that started as a response to infestation by a deadly parasitic fly, says a new study.

“There is more than one way to silence a cricket,” says Nathan Bailey of the University of St Andrews. “Evolution by natural selection has produced similar adaptations from different genetic starting points in what appears to be the blink of an eye in evolutionary time.”

In the Hawaiian crickets, silence arose amongst males as a way to hide from parasitoid flies that are attracted to male song. Fly larvae burrow into crickets, killing them within a week’s time. Quiet crickets avoid those deadly flies and still manage to mate by positioning themselves near males in the population that do sing, Bailey explains.

At first, Bailey and his colleagues thought that silent flatwing crickets had arisen just once and subsequently migrated from one island to another. However, when they looked closely at the wings of crickets on the island of Kauai versus the island of Oahu, they noticed obvious differences in the crickets’ forms.

Further experiments in the lab showed that the silent wings in both cricket populations could be traced to single, sex-linked genes. However, Sonia Pascoal, a postdoc in Bailey’s laboratory, performed a genome-wide scan that showed that the genes responsible are linked to different genetic markers. Remarkably, the same trait arose at about the same time on two islands, but independently and in different underlying ways.

That makes the crickets a remarkable example of convergent evolution, the researchers say, and there is still a lot more to learn from them. Bailey’s laboratory is now working to unravel the genes and developmental pathways involved, as well as their interactions with the rest of the cricket genome.

“This is an exciting opportunity to detect genomic evolution in real time in a wild system, which has usually been quite a challenge, owing to the long timescales over which evolution acts,” Bailey adds. “With the crickets, we can act as relatively unobtrusive observers while the drama unfolds in the wild.”

Web articles – via partners/network co-ordinators. This website and its contents are the exclusive property of ANGA Media Corporation . We appreciate your feedback and respond to every request. Please fill in the form or send us email to: [email protected]
Previous: Ancient Rocks Provide Clues About Earth’s Earliest Crust, Report
Next: Angelina Jolie : Actress reveals son Maddox has an English girlfriend