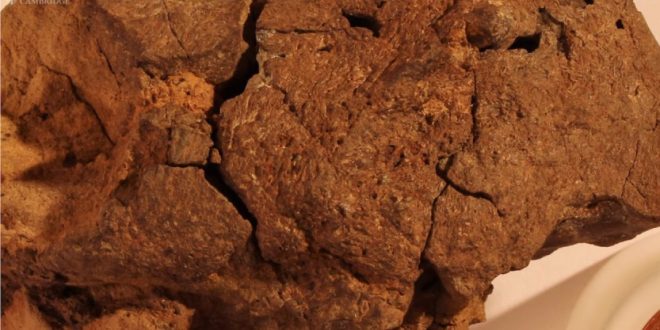 The first fossilised dinosaur brain has been found on a beach in East Sussex and could show that the extinct giants were more intelligent than first thought.

The fossil had been found ten years ago by a fossil hunter by the name of Jamie Hiscocks near Bexhill in Sussex, in 2004. The fossil has now been confirmed as a fossilized brain tissue of a dinosaur.

The fossil is of a dinosaur from the Iguanodon species as it has distinct similarities with brain matter of modern-day crocodiles and birds. Iguanodon is a class of large herbivorous dinosaur believed to have lived during the Early Cretaceous Period, which was more than 133 million years ago.

The soft tissues on the outer layer of the fossil are exquisitely preserved — you can even see the blood vessels running through it. The patterns match what we see today in the closest living relatives of the dinosaurs: crocodiles and birds.

Soft tissue fossils from the dinosaur era are rare finds and require very special circumstances for preservation. Although fossilized stomachs, skin, feathers, and even blood vessels have been found, many scientists would have said we’d never find a brain — until we did.

Cambridge paleontologist David Norman, who announced the discovery at the Society of Vertebrate Paleontology’s annual meeting in Utah this week, theorizes that the animal died and sank to the bottom of a shallow, stagnant pond. It flipped over on its head, which became buried in the muck. The conditions in the pond would have had to be inhospitable to bacteria in order for the tissue to stay intact long enough to become mineralized.

In Norman’s telling, the main mass of the brain ultimately eroded and was replaced with sediment. The fossil as it exists today is mostly made up of this debris, preserved in the shape of the brain casing and enveloped by a very thin layer of fossilized brain material.

This last point was one Norman debated for years with Oxford paleobiologist Martin Brasier, who was involved with the find at an earlier point, and theorized that perhaps the brain had been fossilized in its entirety. Brasier died suddenly in a car crash in 2014, although he left behind notes later found by a former student that indicated he had come around entirely to Norman’s point of view.

The discovery of the fossil will be published in a special edition of Earth System Evolution and Early Life honoring Brasier’s life and contributions to science.

This brain will certainly be the focus of intense research and debate among paleontologist for years and decades to come. Assuming the findings hold up to the scrutiny, this fossil will open up new possibilities into the study of the physical structure of dinosaur brains, and what they might have been thinking.

Web articles – via partners/network co-ordinators. This website and its contents are the exclusive property of ANGA Media Corporation . We appreciate your feedback and respond to every request. Please fill in the form or send us email to: [email protected]
Previous: Canadians now spending more on Internet than television, According to CRTC
Next: University Research Income Sees Minimal Growth of 0.6 percent, Report