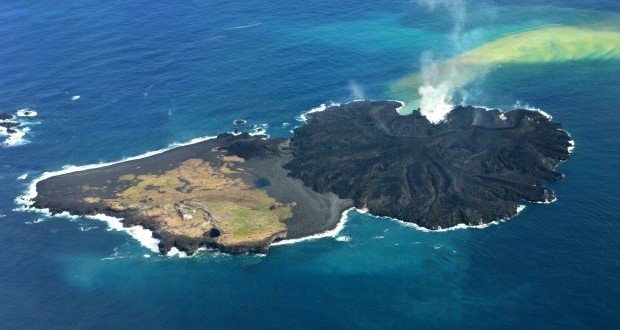 Niijima is Japan’s newest island located in the Philippine Sea that has consistently grown in size since its inception in November. A NASA satellite image from March 30 found that Niijima merged with nearby island Nishino-shima.

NASA’s Earth Observatory reports last week the new island has now swallowed the old one. The two islands first touched shores around New Year’s, but now the new island has completely overtaken the old one. The island now measures about a kilometer across and about 60 metres at its highest point above sea level. So the one island is now three times higher than it was in December and it continues to grow.

“The intermittent, pulsing shape of the cloud stream might be a reflection of the volcanic eruption itself,” officials with NASA’s Earth Observatory wrote as reported by LiveScience. “Strombolian explosions are essentially bubbles of lava and gas rising from Earth’s interior in pulses. Underwater, sediment appears to be stirred up in a green plume that stretches eastward from the island.”

Web articles – via partners/network co-ordinators. This website and its contents are the exclusive property of ANGA Media Corporation . We appreciate your feedback and respond to every request. Please fill in the form or send us email to: [email protected]
Previous: Paula Deen Restaurant Closed, without telling employees : Reports
Next: Trucker Named As 1990 Murder Suspect