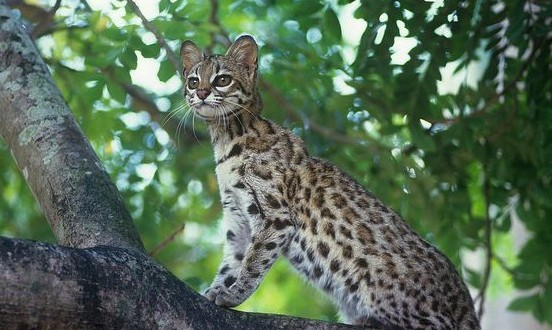 According to researchers there is a new wild cat that was discovered in South America. Scientists compared the DNA from the two populations of Tigrina in Brazil and reported they do not interbreed. Both populations are evolutionarily distinct as well. Results showed that the two populations have contrast interactions related to Geoffroy’s cat and pampas cat.

In the wild there are seven if not more species of small wild cats in the Leopardus genus. These small cats are primarily found in Central and South America. These are the first colonized small wild cats that settled nearly 3 million years ago. Researchers led by Dr. Eduardo Eizirik collected DNA from pampa and Geoffroy’s cats to determine the evolutionary history of the two species.

The new study by Eizirik, Tatiane Trigo of Universidade Federal do Rio Grande do Sul, and their colleagues further revealed a complicated set of relationships between the tigrinas and two other species of Neotropical cats. That evolutionary history includes ancient hybridization and movement of genes between the pampas cat and the northeastern tigrinas (Leopardus tigrinus).

In contrast, southern tigrinas (newly recognized as Leopardus guttulus) continue to hybridize with Geoffroy’s cats, leading to extreme levels of interbreeding between the species along their contact zone. Those patterns add to evidence that hybridization can and does occur between distinct animal species.

As for the two tigrina species, the researchers suggest that they may be suited to different habitats, with the northeastern cats living primarily in savannahs, as well as dry shrub lands and forests, and the southern species living in denser and wetter Atlantic forests.

“Such distinct habitat associations provide a hint to potentially adaptive differences between these newly recognized species and may have been involved in their initial evolutionary divergence,” Trigo says. Moreover, Eizirik adds, “all four species are threatened, and we need to understand as much as possible regarding their genetics, ecology, and evolution to be able to design adequate conservation strategies on their behalf.”

Web articles – via partners/network co-ordinators. This website and its contents are the exclusive property of ANGA Media Corporation . We appreciate your feedback and respond to every request. Please fill in the form or send us email to: [email protected]
Previous: Game of Thrones : Actor Jack Gleeson may quit acting
Next: How to get rid of junk mail for good