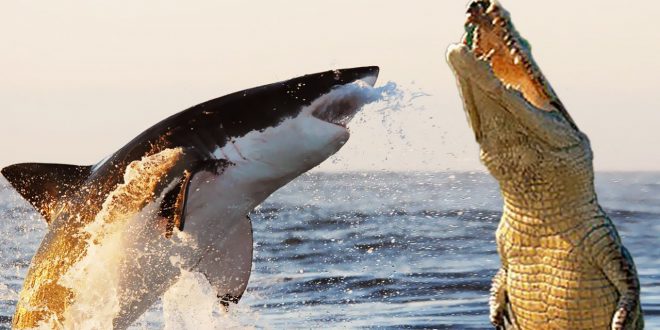 If you’ve ever wondered which toothy predator would come out victorious in an alligator versus shark face-off, you can consider your curiosity satisfied.

A recent research published in the journal Southeastern Naturalist documented the stomach contents of more than 500 alligators taken over a period of 10 years. The study was conducted by Kansas State University’s James Nifong and his colleagues.

According to The Washington Post, the alligators stomachs were pumped using a hose, a pipe and a Heimlich-type maneuver.

“It is meticulous, going through it, sorting through it,” Nifong said. “A lot of these things we’re identifying, they’re very small or we really only have small fragments of things.”

Nifong also said that he and his partners became quite good at catching the gators, remarking that “anything less than four feet long we just hand-grab and bring it on the boat.”

“The findings bring into question how important sharks and rays are to the alligator diet as well as the fatality of some the juvenile sharks when we think about population management of endangered species,” Nifong said, according to The Guardian.

Though evidence of alligator-shark interactions date back as far as the 1870s, Nifong claims that his study is the first to provide insight into the competition between the two species.

“The frequency of one predator eating the other is really about size dynamic,” Nifong said. “If a small shark swims by an alligator and the alligator feels like it can take the shark down, it will, but we also reviewed some old stories about larger sharks eating smaller alligators.”

Beyond striking fear into the hearts of many, the interaction between alligators and sharks is somewhat of an anomaly considering that sharks live in saltwater and alligators in freshwater. Luckily, GPS data from Nifong was able to provide an answer to this question.

According to The Washington Post, Nifong described alligators as “opportunistic predators” who are able to swim up estuaries and out towards the ocean, where they can find sharks.

One alligator stayed in the ocean for 32 days. This is an exceptionally long time for alligators to not go back to freshwater and “rehydrate”, though Nifong said that heavy rain might enable them to stay in saltwater for longer.

“In the happenstance that it rains out there, they can actually drink the fresh water off the top of the salt water,” the researcher explained.

Nifong said that it’s possible that shark and alligator interactions have increased in recent years, but that more research is needed to be able to say why.

“Both populations have suffered declines, and you’ve got a lot of coastal development that have decreased their access to estuarine habitats. Historically, alligators were considered just a freshwater species. We found that not only do they habitually use marine habitats, there are very important linkages between those two systems . . . We need to account for those interactions when we’re planning for those conservation efforts.”

That research will not be coming from Nifong anytime soon, as he accepted a one-year project as a postdoctoral researcher for the Kansas Cooperative Fish and Wildlife Research Unit at Kansas State University

“I’m studying native fish in Kansas streams, looking at what’s affecting their populations,” he laughed. “It has nothing to do with alligators.”

Web articles – via partners/network co-ordinators. This website and its contents are the exclusive property of ANGA Media Corporation . We appreciate your feedback and respond to every request. Please fill in the form or send us email to: [email protected]
Previous: ZTE debuts foldable smartphone with dual screens (Specifications)
Next: New Research Says Exercise Yourself To Dead