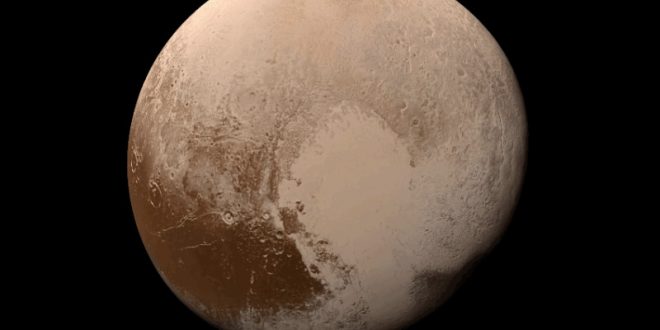 A new video from NASA allows space enthusiasts to land on Pluto, all without leaving their couch.

It was in July 2015 that the New Horizons probe whizzed by Pluto, revealing an extensive catalogue of images and details of the dwarf planet that had never been seen up until that point.

Most notably, the scientific community and the general public fell in love with Pluto’s enormous heart-shaped icy plain, informally known as Tombaugh Regio, after Pluto’s discoverer.

Given its intense cold and travel time of a minimum of nine years based on the journey New Horizons took, humans will certainly not be travelling to Pluto any time soon.

But now, offering us the smallest of glimpses into what it might be like to land on the icy sphere, NASA has released a video showing a collage of photos that were taken during its farthest and closest of approaches.

The video comprises 100 photos taken during the six-week approach to Pluto and the fly-by itself, up to a resolution of 80m per pixel at its closest point to the dwarf planet.

To Pluto, and beyond

“To create a movie that makes viewers feel as if they’re diving into Pluto, mission scientists had to interpolate some of the panchromatic (black and white) frames based on what they know Pluto looks like to make it as smooth and seamless as possible,” NASA said of its video.

“Low-resolution colour from the Ralph colour camera aboard New Horizons was then draped over the frames to give the best available, actual colour simulation of what it would look like to descend from high altitude to Pluto’s surface.”

While its original mission has now been completed, New Horizons still has one last thing to do before it drifts endlessly into the wider cosmos, having been given the green light to photograph the Kuiper Belt object (KBO) 2014 MU69.

What made this KBO of particular interest to NASA researchers is its orbit around the sun. This could suggest it is made from material that existed during the birth of our solar system, so any data that could be returned could offer an unprecedented glimpse into the past.

Web articles – via partners/network co-ordinators. This website and its contents are the exclusive property of ANGA Media Corporation . We appreciate your feedback and respond to every request. Please fill in the form or send us email to: [email protected]
Previous: Meet The 15 Million Computer With ‘2000 Qubits’ By D-Wave
Next: Human stem cells grown in pig embryos (new research)