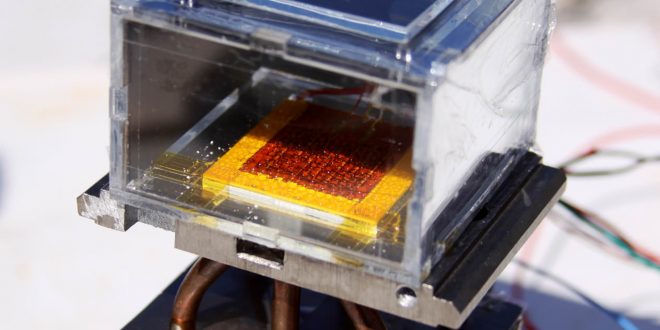 A new water harvester developed by researchers at UC Berkeley and MIT could become a low-energy, off-the-grid means of sustenance.

A proof-of-concept solar-powered harvester, produced in a joint venture between the Massachusetts Institute of Technology and the University of California, Berkeley, uses ambient sunlight to extract water from the air.

In rooftop tests, reported in the journal Science, the device was able to produce 2.8 litres of water over 12 hours in air carrying just 20% humidity – the same level as most desert environments.

And while there is clearly some way to go before improvements yield sufficient water to meet household needs, senior researcher Omar Yaghi calls the device a “major breakthrough”.

“There is a lot of potential for scaling up the amount of water that is being harvested,” he says. “It is just a matter of further engineering now.”

The key technology used by Yaghi and his team is a type of material called a metal-organic framework, or MOF.

These are a class of structure invented – mostly by Yaghi himself – more than two decades ago, which combine selected metals and organic materials in a tightly packed matrix.

Depending on the combination, the metals and organic molecules create rigid, porous structures capable of storing large amounts of particular gases and liquids. An MOF being tested by chemical giant BASF, for example, is capable of holding three times more natural gas than can be forced into an equivalent-sized hollow tank.

There are currently more than 20,000 different types of MOF in use or in development around the world, but Yaghi’s latest, developed with Evelyn Wang, a mechanical engineer at MIT, is the only one to target water.

The MOF used is a combination of zirconium and adipic acid, which binds water vapour.

Wang’s students crammed just under a kilogram of MOF crystals between a solar absorber and a condenser plate, fashioned into a chamber open to the air.

As the ambient air diffuses through the crystals, water molecules attach to the interior surfaces. Sunlight then heats up the vapour bound to the MOF, condensing it into the liquid phase, which then drips into a collector.

The present model operates at quite a low efficiency, and tops out when collected vapour amounts to just 20% of the weight of the MOF. Yaghi and Wang foresee comparatively easy engineering fixes to increase that to as much as 40%.

“We wanted to demonstrate that if you are cut off somewhere in the desert, you could survive because of this device,” says Yaghi.

“A person needs about a Coke can of water per day. That is something one could collect in less than an hour with this system.”

Web articles – via partners/network co-ordinators. This website and its contents are the exclusive property of ANGA Media Corporation . We appreciate your feedback and respond to every request. Please fill in the form or send us email to: [email protected]
Previous: UW Astronomers Have Captured the First-Ever “Image” of a Dark Matter Web
Next: Two dead, three injured in head-on crash in northern Alberta